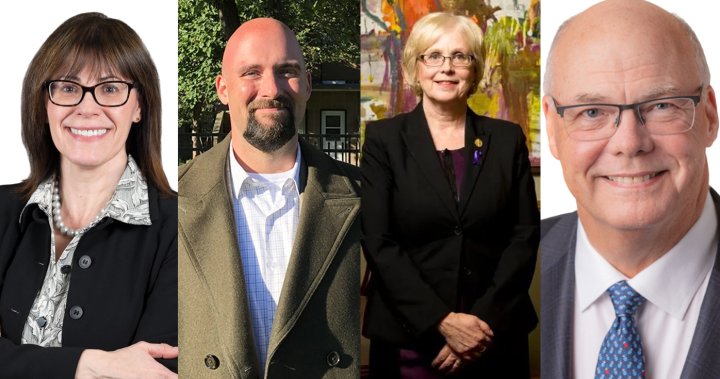 As it had been in 2018, the local electoral map will remain: a drop of orange surrounded by a sea of blue.

On Thursday, voters in the London area’s five provincial ridings went to the voting booth wanting more of what they’ve had for the last four years, re-electing incumbents or, in the case of one riding, giving a landslide victory to the same party.

For some of those re-elected, however, the margins and vote percentages this time were smaller, and fewer Londoners chose to cast a ballot than in years past, averaging a city-wide turnout of about 43 per cent.

The lowest turnout was in London—Fanshawe, where just 36 per cent of registered voters cast a ballot, according to Elections Ontario.

While the Tories kept up their reign in Elgin—Middlesex—London and Lambton—Kent—Middlesex, the New Democrats managed to hold onto all three of the city’s urban ridings — though all three recorded a dip in support compared with the last election.

All three will be heading to Queen’s Park as members of a party soon to be helmed by a new, as yet undecided leader.

In the city, the narrowest races were observed in London North Centre and London West, where the winning NDP incumbents in those ridings bested their Tory runners-up with leads of 9.1 and 11.3 percentage points, respectively, among the smallest margins in southwestern Ontario.

Looking for a comeback after 2018’s brutal showing, the Ontario Liberals saw an improvement in the city’s four ridings compared with the last election, but the gains were largely marginal.

The exceptions, however, were in London North Centre and Elgin—Middlesex—London, where the party saw five and 11 percentage point increases, respectively, over the last election.

The longtime NDP stronghold of London—Fanshawe will remain so for at least another term, with voters there handing NDP incumbent Teresa Armstrong the fourth term she was looking for.

Armstrong received 47 per cent of the vote to Tory runner-up Jane Kovarikova’s 33 per cent, with the Liberals and Greens trailing in third and fourth place, respectively.

“I was hoping it had been an NDP government,” Armstrong said late Thursday of the PC gains seen across the province. “But that doesn’t sway me from continuing to work really hard and represent the people that put their faith in me today, and I’m really humbled by that.”

London—Fanshawe has been an NDP stronghold since Armstrong was first elected in the riding in 2011. Voters have re-elected her twice with solid margins, including in 2018 when she received 55 per cent of the vote to Tory Eric Weniger’s 30 per cent.

Speaking to reporters from her election night headquarters at East London Moose Lodge, Armstrong said she would continue to press for affordable housing, mental health care coverage under OHIP, and a province-wide dental plan at Queen’s Park.

“I will continue with those things when I get back, along with so many other things, like a doctor shortage. I mean, the list goes on and on and on,” she said.

“And those things have been broken for many consecutive governments with Liberals and Conservatives. Those are the things I’m going to be raising.”

“Bringing bills forward and forcing them to … vote for our bills and then push them to get them out of committee,” she continued.

“That’s where you get public input, right? The constituents, get them excited about that. Get them upset about it. Get them pressuring this government.”

Such pressure has worked in the past, she said. “If they actually had political pressure from groups and politicians, … they would actually do something. But it shouldn’t come to that.”

In third place came the Liberal’s Zeba Hashmi who received 10.4 per cent of the vote, a slight improvement over the 8.4 per cent the party saw in 2018.

The Green’s Zack Ramsey placed fourth with 3.5 per cent of the vote, one percentage point lower than the last election.

Of the 94,721 registered voters in the riding, 34,257, or roughly 36 per cent, cast a ballot, according to Elections Ontario, the lowest turnout among the city’s four ridings.

A major race to watch was in London North Centre, where political observers had anticipated a close showing between NDP incumbent Terence Kernaghan and Progressive Conservative Jerry Pribil.

In the end, voters in the riding sent Kernaghan back to Queen’s Park for a second term with 39 per cent of the vote to Pribil’s 30 per cent, lower than the 47 and 31 per cent the parties respectively earned there in 2018.

“It’s such an incredible honour to be able to continue to serve as MPP for London North Centre,” Kernaghan told reporters at Winks on Richmond Row where he and his supporters had camped out to watch the results.

“London’s such a kind and caring and thoughtful and intelligent community, so it’s quite overwhelming, and I’m looking forward to the good work that we can do together.”

Kernaghan began the night with a sizable lead, but one which became smaller and smaller as the night progressed. At one point, with roughly 36 per cent of polls counted, Pribil trailed Kernaghan by just two percentage points.

For Pribil, however, it was not to be, and Kernaghan’s lead continued to grow as more results came in.

After earning his second consecutive win in London North Centre for the Ontario NDP, Terence Kernaghan arrives to a crowd of supporters #LdnOnt pic.twitter.com/SQU0wJ42Eu

After a brief speech to supporters, the victory party is now underway as Terence Kernaghan recaptures London North Centre for the Ontario NDP #LdnOnt pic.twitter.com/81CTuyqSTN

Asked about the Tories gaining an even larger majority than in 2018, Kernaghan replied, “It just means that as official opposition, we’ll have to have our voices be even louder.”

“We’ve seen so many things during COVID that have come under threat, and we have to make sure that the government is taking note and applying the proper policies and procedures.”

Kernaghan was first elected to the riding four years ago taking 47 per cent of the vote and becoming the riding’s first NDP MPP, helped in part by the provincewide drubbing the Liberals took during the 2018 campaign under former premier Kathleen Wynne.

Liberal Kate Graham, who placed third in the 2018 election with 15 per cent of the vote, placed third again this time around, but with 21 per cent support, with the party likely snagging voters away from the NDP.

Like in London—Fanshawe, voters in the city’s other NDP stronghold, London West, also opted to send their longtime NDP MPP back to the Ontario legislature for a fourth term, continuing the party’s near decade-long hold on the riding.

“I’m honoured. It’s really humbling to have that trust of the voters to be their voice at Queen’s Park,” Sattler told Global News at her election night headquarters, Strokers Billiards.

“I’m excited about going back and keeping on fighting for the services that the people in London West need, and I’m looking forward to the opportunity to make a difference for this community and for this province.”

Sattler has held the riding since 2013, when she took roughly 42 per cent of the vote in a byelection prompted by the resignation of Liberal MPP Chris Bentley in the wake of the gas plants scandal.

In 2018, she was re-elected for a third term with 55 per cent of the vote, a 16-percentage-point lead over Tory Andrew Lawton.

Like the city’s other NDP incumbents, Sattler saw a dip in support, amounting to roughly 10 percentage points compared with the last election, while the Tories and Liberals saw gains of five and two percentage points, respectively.

Asked if she was concerned about the results going a different way, Sattler replied: “Of course, you can never take voters for granted. You always have to work hard to earn their trust.”

“That’s why our campaign was so focused on making sure that we contacted as many people as we possibly could, knocked on doors, made phone calls. I was out there twice a day doing the work that needs to be done.”

Among the things Sattler said she plans to do upon returning to Queen’s Park is reintroduce the Our London Family Act.

The bill, tabled earlier this year, is aimed at fighting Islamophobia and hate crimes and was named for the Afzaal family, the victims of last year’s deadly truck attack in Hyde Park. Police have said the family was targeted because of their faith.

Monday marks the one-year anniversary of the attack.

Family speaks out ahead of first anniversary of deadly attack in London, Ont.

“I’m going to do whatever is necessary to make that legislation into law. We worked in good faith with the government house leader, with the minister responsible prior to the election to find a path forward to expedite that legislation,” Sattler said.

“They refused to do what was needed, but we’re going to restart that conversation. This can’t be playing politics. This has to be a good faith effort to move that legislation forward.”

Voters in Elgin—Middlesex—London chose, with a landslide margin, Tory candidate Rob Flack to be their representative at Queen’s Park, continuing the party’s more than decade-long dominance in the riding.

Flack, a local businessman, secured 51 per cent of the vote, beating runner-up Andy Kroeker of the NDP by 33 percentage points.

Kroeker ended the night with 18.2 per cent of the vote, 0.8 percentage points ahead of the Liberal’s Heather Jackson.

It was a notable shift from 2018 when the NDP received 32 per cent of the vote to the 7.3 per cent seen by the Liberals, who were taking a beating across the province. Voters last elected a Liberal in the riding in 2007 under then-leader Dalton McGuinty.

Global News reached out to Flack’s campaign for comment but did not receive a response by publishing time.

The two-year-old New Blue Party and its candidate Matt Millar secured fourth place with 5.1 per cent of the vote, while the Green Party’s Amanda Stark received 4.7 per cent.

The riding was the only one in southwestern Ontario to have no incumbent candidate running in this year’s election, after longtime PC MPP Jeff Yurek resigned from the role at the end of February after more than a decade.

Like in Elgin—Middlesex—London, voters in Lambton—Kent—Middlesex opted to keep their riding blue, and did so by giving incumbent Monte McNaughton a landslide victory over the runner-up NDP candidate.

McNaughton took home 59 per cent of the vote in Thursday’s election, an increase of three percentage points compared with 2018, making him the only incumbent covered here to gain support.

“Thank you Lambton-Kent-Middlesex! From growing up playing hockey in Glencoe to working at my family’s hardware store in Newbury, to raising our family, Southwestern Ontario has always been home,” McNaughton said in a tweet Thursday night.

“I am honoured to be re-elected as your Member of Provincial Parliament.”

From growing up playing hockey in Glencoe to working at my family’s hardware store in Newbury, to raising our family, Southwestern Ontario has always been home.

I am honoured to be re-elected as your Member of Provincial Parliament. #ONpoli pic.twitter.com/91aek9nNfE

The NDP’s Vanessa Benoit placed second in the race with 18.8 per cent of the vote, a decrease of 15 percentage points from 2018, marking the lowest result the party has seen in the riding since 2007.

The Liberal’s Bruce Baker received 9.7 per cent of the vote, up almost four percentage points from 2018, while the New Blue Party’s David Barnwell placed fourth with 6.2 per cent.

The Green Party’s Wanda Dickey secured four per cent of the vote, up nearly one percentage point from the last election.