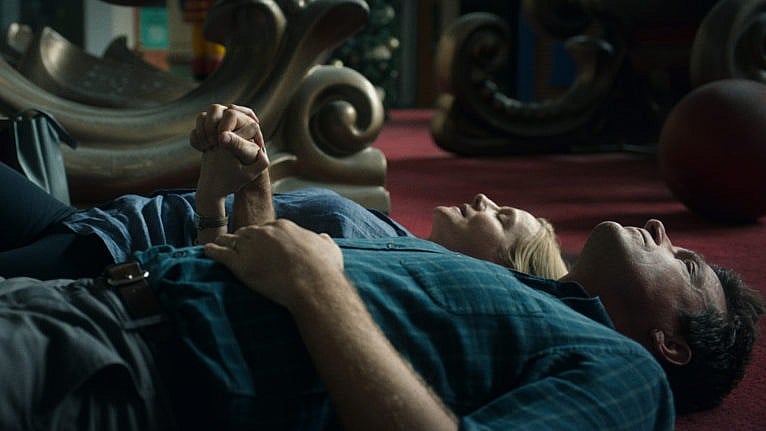 Here are four things that I’m going to be watching on Netflix this month (click or tap on the title to take you to the description below). You can also look out for the ⭐️ emojis.

All of Us Are Dead 🇰🇷 — NETFLIX SERIES

I Am Georgina 🇪🇸 — NETFLIX SERIES

This show, whose title translates as “These Black Black Eyes,” is about a young man (Tahir Raj Bhasin) who finds himself fending off the unwanted advances of a young woman (Anchal Singh) who happens to be the daughter of a powerful gangster. Can he break it to her that he’s in love with someone else and still avoid getting killed?

Sequel to the 2018 film about the death of a billionaire and the conflicts his inheritance creates among his many relatives, mistresses and servants.

Grey’s Anatomy  writer Bill Harper created this animated kids’ series about four superpowered children who learn to use their powers at the “Action Academy.” Since the show wants to present good role models, they’ll be taught that violence doesn’t solve problems and villains aren’t all bad.

2000s nostalgia is finally starting to displace 1990s nostalgia in the culture; this series is a reboot of a popular Mexican telenovela from the 2000s, itself based on an Argentine soap opera. All three shows are about a prestigious boarding school known as the Elite Way School (EWS), where, as the name implies, the students are mostly rich, but there are a few scholarship students who aren’t, and they’re threatened by a secret society that aims to drive the poor people out of the school. Each version of the show focuses on a group of students who come together in the time-honoured tradition by starting a band; the band from the earlier Mexican version, RBD, became a huge success outside of the show, to the point that one of the actors in the new version had to publicly apologize for saying he didn’t like their music.

Period drama about a nightclub in 1950s Istanbul and a woman, previously in prison for murder, who takes a job there to be closer to her adult daughter.

Horror film about a family whose secluded pastoral life is interrupted when they are attacked by a monster who is powered by their fear. Directed by David Casademunt; also known as “The Beast.”

Another reality show about a bunch of strangers living together in a house. The twist is that all of them are prominent TikTok influencers.

Another manifestation of 2000s nostalgia: a reboot of the 2000s animated series about a Calvin-ish kid and his Hobbes-esque talking dog.

The new year’s first apocalypse movie (but surely not the last) stars Chloë Grace Moretz as a pregnant woman who will soon be giving birth, and it’s just her bad luck that this happens around the time when the robots have taken over the world and are wiping out humans.

A young man finds he has a mysterious condition where his heart has stopped beating but he isn’t dead yet, and only his mother may know the secret reason for this.

How I Fell in Love with a Gangster 🇵🇱 — NETFLIX FILM

A fictionalized version of the rise and fall of Polish gangster Nikodem Skotarczak.

Alyssa Milano stars in an adaptation of the novel “Brazen Virtue” by Nora Roberts, about a crime novelist who has to become a real-life sleuth after her sister is killed.

Every month there needs to be at least one show about a small town with a secret. This one is about a small Danish town that became famous for being hit by a meteor, and a teenage girl named Emma who discovers that it wasn’t a meteor at all and that there’s a conspiracy to hide the shocking truth.

Sur (Shenina Cinnamon) loses her scholarship after someone leaks an embarrassing selfie, and she’s determined to find out who leaked it, even if it means spying on the phones of her fellow students. Directed by Wregas Bhanuteja, this film earned 17 nominations at the Indonesian Film Festival.

Ricky Gervais’s comedy-drama about a man recovering from his wife’s death.

Inspired by the horror podcast of the same name, this series stars Mamoudou Athie as an archivist who takes on the job of restoring the videotapes of a filmmaker (Dina Shihabi) who disappeared in the 1990s while investigating a cult, known to podcast listeners as “The Cult.” While working on these damaged videotapes, Athie becomes convinced that it’s not too late to save the person who made them. Marc Sollinger and Daniel Powell, who created the podcast, are involved as producers, and The Vampire Diaries writer-producer Rebecca Sonnenshine is the showrunner.

An anthology of three short stop-motion animated films that share the same setting and dark-comedy tone, produced by England’s Nexus Studios and with a voice cast that includes such familiar names as Miranda Richardson and Helena Bonham-Carter.

Can Riverdance, the Irish dance show that took the live theatre world by storm in the 1990s, succeed as an animated movie about two kids who set out on a journey to a magical world where everyone dances like that? The producers of this movie hope so, and they signed up Pierce Brosnan to do two of the voices.

This Is Not a Comedy 🇲🇽 — NETFLIX FILM

A comedian, looking for a purpose in life, unexpectedly finds it when a friend asks him to donate his sperm so she can get pregnant.

Spinoff of the animated series that is like Paw Patrol, except with talking trains.

The previous seasons of this crime drama have been about cops who infiltrate crime gangs and try to take them down. Expect more of the same, though not necessarily with the same cops in every season.

A special focusing on a rich, racist jerk of a character created by the Colombian standup comic Alejandro Riaño.

Midnight in the Switchgrass

Documentary series about English con artist Robert Hendy-Freegard, who conned his victims by claiming to be an undercover cop or spy.

As the pandemic heads into year three, so does this reality series, which asks the still-relevant question: how long can single people give up having sex?

Each of the six episodes of this documentary series looks at the distinctive nightlife of a major Asian city. The cities featured are Tokyo, Seoul, Mumbai, Taipei, Bangkok and Manila.

An American hairdresser (Laura Marano) is invited to work at the wedding of a royal prince (Mena Massoud). Will they fall in love despite him being about to marry someone else? It seems likely.

Netflix will never run out of great English actors to play historical figures. This time the actor is Jeremy Irons and the historical figure is the historically unpopular Neville Chamberlain. The film, based on the novel Munich by Robert Harris, takes place as Adolf Hitler (Ulrich Matthes) is preparing to invade Czechoslovakia, and looks at Chamberlain’s fumbling attempts to avoid war, though the main characters are actually two fictional friends, one English and one German, who take part in negotiating the notorious Munich Agreement.

Belcim Bilgin and Engin Altan Duzyatan star in a film that, despite its title, is about a woman trying to use a shared love of music to form a bond with her uncle.

Jason Bateman’s attempt to become the new Bryan Cranston, playing a money-launderer who moves his operation and his family to the Lake of the Ozarks, has been nominated for many awards and won several. But like most Netflix shows, it has to end after no more than four seasons. As usual, Netflix is doling out the last season in two batches. Will Bateman and his family survive all the crime and double-crossing intact, or will he get more awards if he dies in the end?

Escapist series about young and pretty people who get their dream jobs working as the staff of an island resort hotel.

Nickelodeon kids’ sitcom about a girl (Gabrielle Nevaeh Green) who accidentally brings her online avatar to life and has to pass her off as a fellow student at her school.

Documentary short about a man and his new wife living in a displaced-persons camp in Afghanistan.

Adaptation of the children’s picture book series abut Ada Twist, who tries to convince a skeptical audience that science is fun.

The story of Brazilian football superstar Neymar, his life, and his style on and off the field.

The apocalypse is still going on and the characters are still stuck on a train looking for a safe place in a world that has become an icy wasteland.

Salvatore Ficarra and Valentino Picone star as bumbling TV repairmen who stumble across a murder and try to avoid getting, as the title implies, framed.

An out-of-season series of 11-minute episodes about a group of not-particularly-angry birds who have fun at their bird-themed summer camp.

Every Breath You Take

Carlos Montero and Agustín Martínez created this thriller series where two girls (Ana Tomeno and Carla Campra) find that their parents are missing and also that their parents may have killed 23 people in some kind of bizarre ritual.

A spinoff for one of the stars of Netflix’s Queer Eye, based on his podcast of the same name, where he discusses not only his own field of hairdressing, but any subject that interests him; the format has him picking a topic and seeking out expert advice so he (and we) can understand them.

An Adam Sandler production starring his buddy Kevin James and featuring his buddy Rob Schneider. James plays a football player suspended from the NFL, who tries to reconnect with his young son by coaching his ragtag misfit kids’ football team.

In From the Cold — NETFLIX SERIES

Kristen Bell stars in a limited series that is the latest take on the “Rear Window” theme, playing a bored woman who spends all day looking out the window at the apartment across the street, where she sees romantic possibilities… but then she thinks she’s seen a murder.