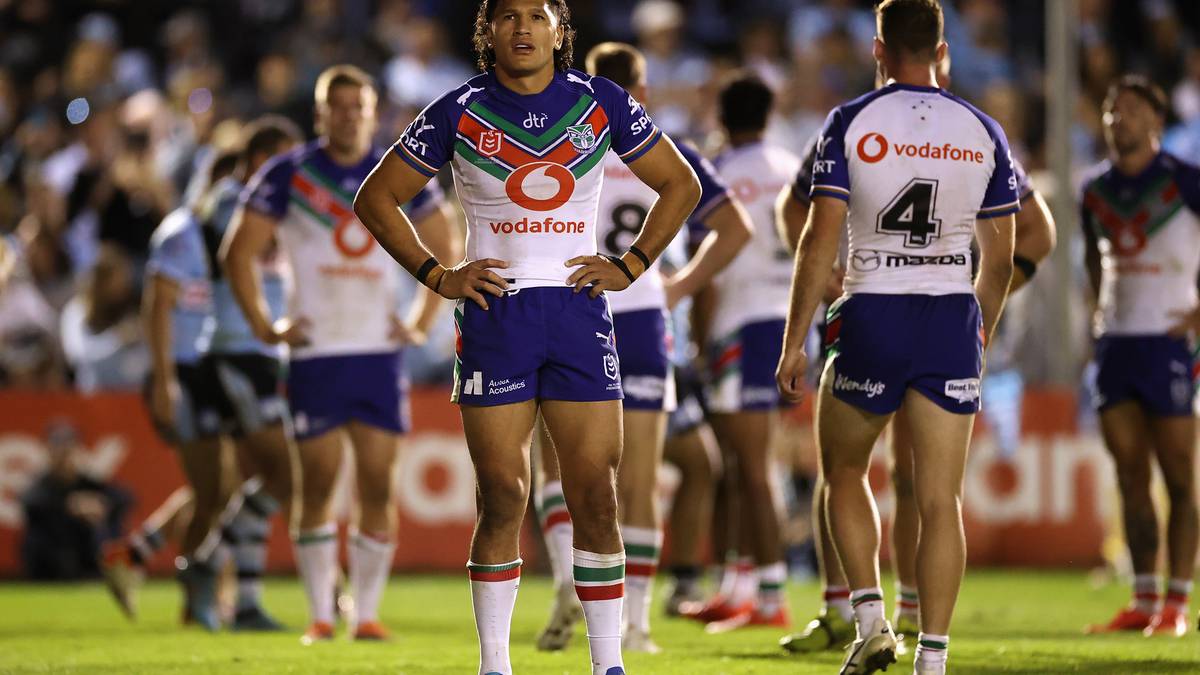 Dallin Watene-Zelezniak and the Warriors endured a day to forget against the Sharks. Photo / Getty

One step forward, two big steps back for the Warriors.

After their win last week, an unwanted pattern continued on Sunday, with a truly baffling performance against Cronulla as they slumped to an awful 29-10 defeat, despite the Sharks playing more than an hour with only 12 men.

Cronulla fullback Will Kennedy was dismissed in the 16th minute, after a terrible high tackle on Reece Walsh, and that should have been a game-changing moment.

It was – but for the wrong team. The home side were inspired, digging deep in a magnificent display, even proving resolute when they were down to 11 men for a 10-minute period in the second half, and becoming the first team to win with 12 men against 13 since 2008.

In contrast, the Warriors were a muddle; falling short in effort and execution and being let down by a number of poor decisions and a lack of patience.

Their attack was too often laboured, and they tried to go east to west too often before they had gone north.

The lack of composure and leadership was a worry, given the Warriors won’t have too many better chances this season to topple a potential top-four contender.

The Sharks enjoyed 59 per cent possession and were ahead with goal-line dropouts (5-1) and line breaks (7-2).

Nicho Hynes was sensational for the Sydney team, as they scored a remarkable four tries while undermanned. In contrast Shaun Johnson had a mixed game against his former club, one of many Warriors who couldn’t rise to the occasion.

In front of a vocal crowd, the Sharks struck first with Hynes finishing off a 70-metre move after an incursion on the right edge, with the Warriors getting their defensive numbers wrong.

The flashpoint of the match came ten minutes later, with Kennedy’s coat-hanger tackle on Walsh. Whether or not there was intent, the sight of Walsh being thrown into mid-air was unpalatable given recent interpretations, and the referee had no hesitation.

The Warriors scored from the resultant penalty, with a Walsh cut-out ball sending Dallin Watene-Zelezniak across in the right corner.

It was reward for some sustained pressure, with Matt Lodge and Eliesa Katoa prominent in the early exchanges.

Lodge was key to the Warriors’ next try, with an offload on halfway sending Walsh on an arcing run into open pasture. An audacious flick pass found Daejarn Asi, before Viliami Vailea finished off a perceptive grubber by the five-eighth.

At 10-6, the Warriors had a platform to launch but endured a muddled second quarter. They struggled to put any pressure on the undermanned Sharks and were mostly defending, with back rower Teig Wilton’s try coming after six successive goal-line sets, while fifth-tackle options were poor.

Vailea went close just after halftime – unable to collect an Adam Pompey pass – but the pattern of poverty continued and Connor Tracey crossed from a smart set move, after the Warriors coughed up possession near halfway.

The visitors struggled to assert themselves, but got another bonus in the 53rd minute, with Jesse Ramien sinbinned for a shoulder charge on Euan Aitken.

But the poor decisions continued, with Watene-Zelezniak ceding possession attempting a low-percentage play, when the Warriors just needed to use their two-man advantage.

The frustration continued, as the Sharks defended two successive sets with 11 players, before a Johnson grubber rolled dead.

There were some promising moments, but too often any initiative would end with a mistake or a cheap penalty. Tracey’s second try in the 66th minute sealed the result against the deflated Warriors, before Ramien’s late effort only added to the embarrassment.