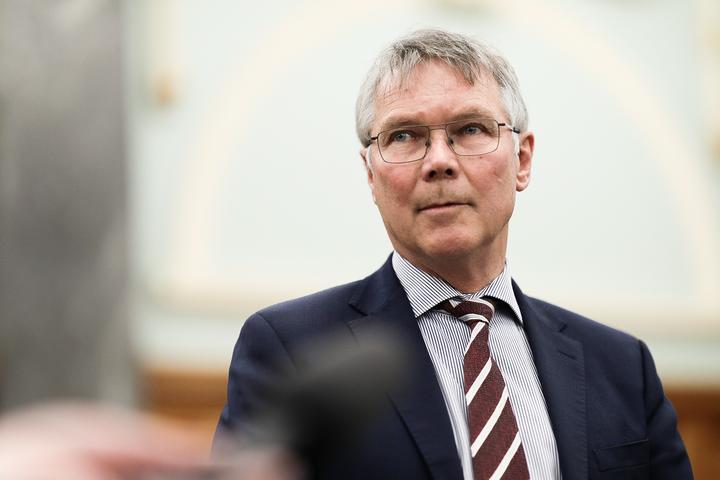 Attorney-General David Parker says New Zealand could return to normal faster than we might imagine, because the Omicron outbreak has not overwhelmed the health system.

The traffic light settings, mandates and vaccine passes are on the table for discussion by Cabinet, and a decision on their future is expected in the coming week.

“As we pass through the Omicron peak I’ve got some confidence that we’re going to return to normality probably faster than people expect,” Parker told AM.

While ruling out any major changes to come into effect within the next seven days due to the current outbreak, Parker said the peak had not overwhelmed the public health system.

“Even though we’re at peak the hospital system, whilst under pressure, is under control and we’ve got enough ICU beds.”

He defended Director general of health Dr Ashley Bloomfield, who is maintaining the health system is not at crisis point.

“I’m with Dr Bloomfield here. Ukraine’s a crisis, women and children being blown to bits, people in shelters, cities without food and water. Covid is a crisis with millions of people dying around the world. The health system is under pressure because of Covid and other factors but I think he’s right to call it under pressure, not a crisis.”

Prime Minister Jacinda Ardern said yesterday Cabinet would be “relooking at everything from mandates, the vaccine passes – which we don’t believe will need to be used as widely anymore – and we will also be looking at all of the settings within the traffic light”.

The country is at the red traffic light setting of the Covid-19 Protecting Framework, which came into force on December 3 to replace the alert level system.

New Zealand moved to red on January 24 after fears Omicron could be circulating in the community.

Ministry of Health data shows that Māori, who make up 17 percent of the population but 24 percent of cases, are again disproportionately represented, making up a quarter of all deaths nationally – nearly half were under 59 years of age.

Epidemiologist Professor Michael Baker said history was repeating itself with inequalities, which were seen for all serious infectious diseases.

“We need to keep focusing over and over again on minimising inequalities, which means really delivering more service to people who are most affected by infection and I think the challenge now is to raise vaccine and booster coverage rates for Māori and Pacific.”

The data showed people over the age of 70 have made up more than half of Covid-related deaths since the beginning of the pandemic.

With new hospital admissions appearing to plateau, Old said he hoped hospitalisations would turn a corner over the next week.

However, pressure continues to mount at the region’s hospitals with hospitalisation rates remaining high and staffing numbers below ideal levels.

Old said before Covid, DHBs in Auckland were already running about 15 percent below ideal staffing levels because of issues such as vacancies and unplanned leave. Today, staff levels were down by up to a further 10 percent.

The Herald reported yesterday that nurses and midwives were being offered a $500 bonus for every night shift they worked as hospitals encountered severe staffing shortages amid Omicron.

Old said the bonuses were put in place for two weeks to cover “quite extreme circumstances” and were a recognition of people working critical but otherwise hard-to-fill shifts, such as nights.

Middlemore’s emergency department clinical director Dr Vanessa Thornton said Covid sought and found unvaccinated people, and also urged everyone to get vaccinated and to get a booster shot.

“We do see the sickest of the people and that’s why we are trying to recommend people get vaccinated to avoid coming into hospital.”

They could treat more people – including expanding to another ward if needed, she said.