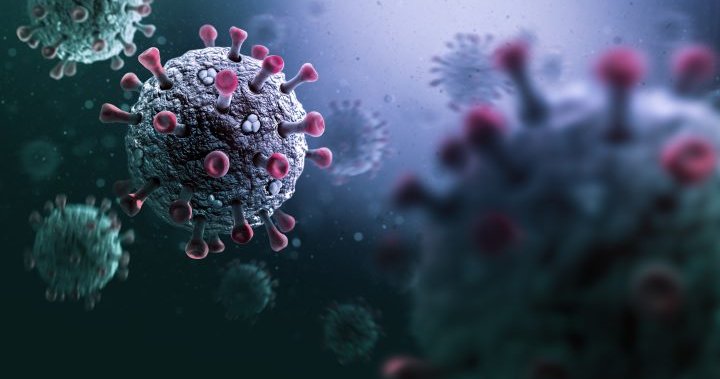 As the highly transmissible BA.2 subvariant of Omicron dominates the COVID-19 spread across Canada and globally, scientists are keeping a close eye on a new hybrid variant.

The XE sub-lineage of Omicron, which was first detected in the U.K. in January, is what experts call a “recombinant virus.”

A recombinant virus is a combination of genetic material from two or more different viruses — in this case, the original subvariant of Omicron (BA.1) and the more infectious BA.2.

6 cases of COVID-19 XE have been reported in Canada

As of April 6, Canada had detected six cases of the XE recombinant lineage, the Public Health Agency of Canada (PHAC) told Global News on Wednesday.

“As long you have everything open now — no mask on and nothing — the potential that you generate new mutants, variants or new recombinants is always open,” said Dr. Horacio Bach, an infectious diseases expert at the University of British Columbia.

The XE is being classified under the Omicron variant of concern and the World Health Organization (WHO) says it will fall under that lineage until any significant difference in transmission and severity is reported.

What is a recombinant variant?

All viruses mutate and have subvariants that have a different genetic makeup than the original variant but have a common origin.

A recombinant variant is created when two variants infect the same cell in the body at the same time, said Bach.

Omicron: How does it compare with other COVID-19 variants of concern?

“Recombinant variants are not an unusual occurrence, particularly when there are several variants in circulation, and several have been identified over the course of the pandemic to date,” said Susan Hopkins, chief medical adviser for the UKHSA, in a statement on March 25.

“As with other kinds of variant, most will die off relatively quickly,” she added.

The XE is a combination mostly of the spike protein — which is responsible for cell entry — of the BA.2, but also has genes from BA.1, said Canada’s Chief Public Health Officer Dr. Theresa Tam during a press conference on Tuesday.

2:14
Where have past variants of concern gone?

Based on early analysis, the XE is about 10 per cent more transmissible as compared to BA.2, according to the WHO.

In the United Kingdom, as of April 5, 1,125 cases of XE have been identified, the latest report from the U.K. Health Security Agency said.

Canada has detected BA.2 cases. What we know about this Omicron subvariant

UKHSA said XE has been designated as the basis of community transmission and possible growth in England. The agency estimates a 12.6 per cent growth rate above that of BA.2, which is driving the sixth COVID-19 wave in Canada.

However, the WHO, PHAC and UKHSA say that more data is needed to confirm the increased transmissibility.

Even though only six cases have been reported in Canada, Bach estimates that, due to a lack of testing, that number is likely much higher.

A higher level of transmissibility means there will be more virus in the environment and more people can get infected, he explained.

So far, there is not enough evidence to draw conclusions about whether XE can cause more severe illness or impact vaccine effectiveness, experts say.

PHAC said scientists are looking for signs that XE changes disease severity, transmissibility or impacts the effectiveness of diagnostic tests, vaccines or treatments for COVID-19.

“Right now, it doesn’t look like it’s severe or more severe compared to the other one (BA.2),” said Bach.

Vaccinated Canadians can have COVID-19 symptoms despite testing negative. Here’s why

However, every time the virus changes there is a risk that the vaccine, which was designed to target the original Wuhan strain of COVID-19, will be less effective, he added.

“Now you have two different pieces — they are glued together, basically, and that is concerning …. because we already see that the vaccine against the Omicron is not so effective.”

A growing body of research has shown that COVID-19 vaccines are standing up to the Omicron variant, at least among people who received booster shots. But protection from two doses has shown to drop off after a few months.

This why public health officials and experts are recommending boosters along with masking and good ventilation as a form of defence.

“This virus is still with us, it’s circulating at a really intense level, and we need to use all of the tools that we have at our disposal,” Dr. Maria Van Verkohve, WHO’s COVID-19 technical lead, said in a YouTube video last week.

“Vaccinations remain critically important and are incredibly effective at preventing severe disease and death,” she added.