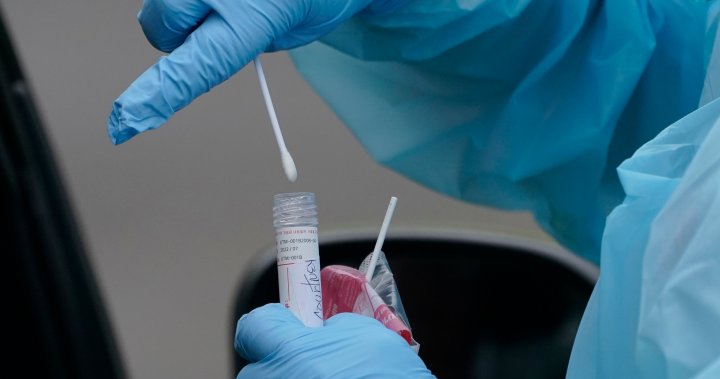 Ontario is reporting 11,582 COVID cases on Wednesday, as hospitalizations continue to soar. The provincial case total now stands at 828,032.

Over the last three days, there were 11,352 new infections on Tuesday, 13,578 reported on Monday, and 16,714 new cases on Sunday. However, due to recent testing eligibility changes the province warns the counts are an underestimate of the true spread of the virus in the community.

For the regional breakdown, 2,524 cases were recorded in Toronto, 1,435 in Peel Region, 1,294 in York Region, and 699 in Durham Region. All other local public health units reported fewer than 600 new cases in the provincial report.

Ontario reported 2,081 people in general hospital wards with COVID-19 (up by 791 from the previous day) with 288 patients in intensive care units (up by 22).

Hospitalizations and those in ICUs continue to rise daily as Ontario grapples to contain Omicron. Although Omicron is considered less severe than Delta, the unprecedented surge in cases has driven general hospitalizations to soar at a much faster rate. However, ICU is still rising but at a slower rate when compared to hospitalizations.

Staffing shortages due to the new variant have impacted hospitals as the need for beds increases.

For comparison, in the third wave peak in April 2021 which was the worst wave for hospitalizations, the province saw almost 2,400 patients in general hospital wards and as many as 900 patients in ICUs with COVID among a population that was vastly unvaccinated.

Ontario’s current fourth wave is approaching the third wave peak for hospitalizations, but is currently further behind in ICU.

Provincial officials noted this new dataset with vaccination status for hospitalizations will grow and improve over time as more information is collected. There may also be a discrepancy due to how and when the information for both is collected.

The death toll in the province has risen to 10,252 as 13 more virus-related deaths were reported.

As of 8 p.m. on Tuesday, there are more than 11.4 million people fully immunized with two doses, which is 88.2 per cent of the aged 12 and older population. First dose coverage stands at 90.9 per cent. Third dose immunity is at 31.4 per cent.

The province administered 180,013 doses in the last day. There are more than 4 million Ontarians who have received a booster shot.

For young children aged five to 11, first dose coverage stands at 44.5 per cent with 2 per cent who are now fully vaccinated.

Meanwhile, 683,750 Ontario residents were reported to have recovered from COVID-19, which is 82 per cent of known cases. Resolved cases increased by 11,669 from the previous day.

The seven-day average has now reached 14,599 as daily case counts due to Omicron continue to hover around unprecedented highs. This is up from 9,183 a week ago.

The government said 59,137 tests were processed in the previous 24 hours. There are 94,605 tests currently under investigation.

Test positivity hit 28.1 per cent meaning more than 1 in 4 tests are coming back positive for COVID. Last week, test positivity was at 26.9 per cent.

However, Ontario officials have recently changed testing eligibility for those seeking to get a PCR test to detect COVID-19 to only the most high-risk populations such as health care, long-term care, those who live and work in congregate settings, etc.