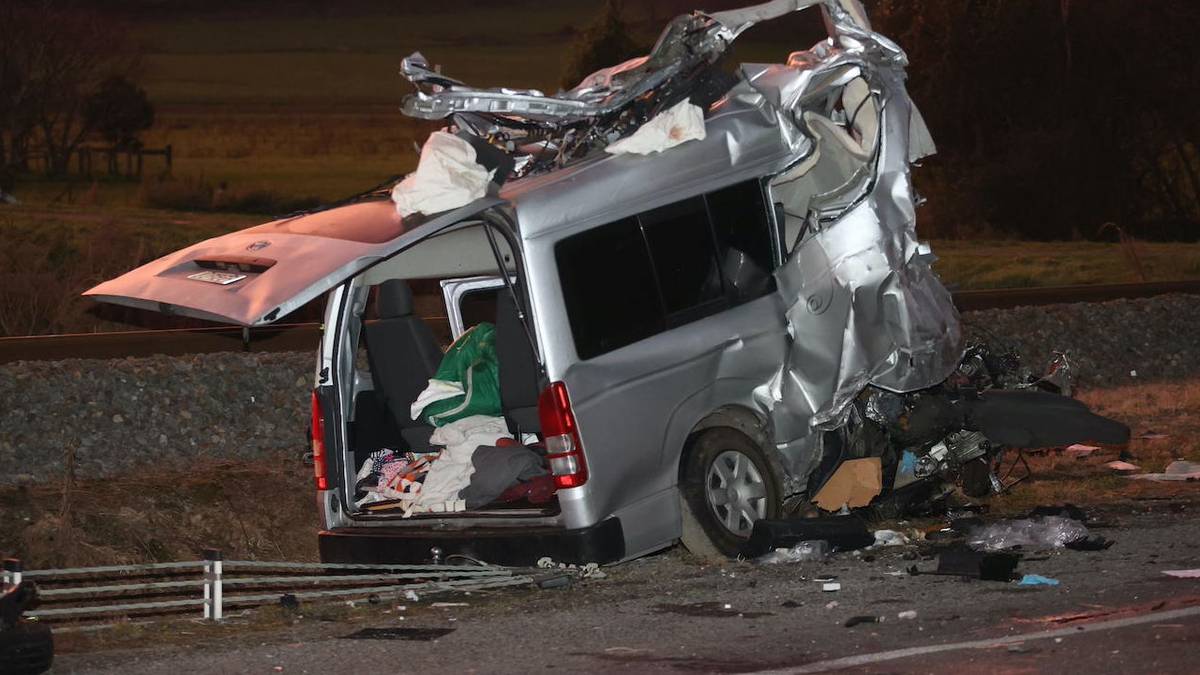 WARNING: Images may be disturbing

Images of the scene where two vehicles collided on State Highway 1 south of Picton show the devastating impact of the crash that killed seven in what is one of the deadliest road incidents in New Zealand history.

Police officers escorted a Herald photographer and journalist close to the crash scene to highlight the devastating aftermath.

While bodies were removed from the scene into hearses at around 5pm, debris from the massive impact was still strewn across the highway.

Hundreds of pieces of metal, plastic, glass and rubber was littering the road.

There were also touching human personal items like cans of energy drink, a single loo roll, and blue face mask.

The van was a twisted, mangled mess on the side of the road. The impact had been completely front-on, and the vehicle was crumpled into more than in half.

The large truck was around 50m further up the road, and was being winched out of the ditch as darkness fell.

In the blink of an eye seven lives are lost

A St John ambulance official who was among those on the scene today praised bystanders who quickly stepped in to offer first aid before first responders arrived.

“We had some people with medical training who did a really good job in trying circumstances,” Murray Neal, who serves as a territory manager for St John Ambulance, told the Herald.

“These guys did a really good job – a really good job,” he repeated this afternoon, explaining that because of their medical training they were able to continue helping even after paramedics arrived at the scene.

Police today soberly described the crash scene south of Picton – which resulted in seven deaths, including an infant – as “absolute carnage”.

A light van with nine people inside appears to have crossed the centre line and smashed head-on into a refrigerated goods truck around 7.30am, police officials said in a press conference this afternoon outside Blenheim Police Station.

“It’s just absolutely tragic how in the blink of an eye seven lives are lost,” said Tasman District Commander Paul Borrell, extending his condolences to the families of the victims.

“[It’s] a reminder for every single one of us, in a blink of an eye seven lives are gone.”

In addition to the seven deaths, the two others who were inside the van have been taken to Wellington Hospital – one with critical injuries and the other with serious injuries. The truck driver suffered minor injuries.

Police said they are still working to notify next of kin, with officers in Canterbury assisting with the task due to having more staff and resources there.

The crash occurred on State Highway 1 north of Koromiko, as the van travelled north towards Picton. Police said they are still investigating the cause of the crash and will look into safety factors along that stretch of road.

“There’s a variety of things that may have happened and I can’t comment on any of those things until the investigation is completed,” Borrell said.

Marlborough Area Commander Inspector Simon Feltham said police are also looking to provide assistance to all first responders who are coping with what they saw.

“One of our staff members, it was their third day working out of police college,” he explained. “It’s a horrific thing to have to deal with.”

The road remained closed at 4.20pm. Two hearses were seen leaving the scene.

He later posted an update thanking locals for their supportive comments.

“The team is pretty resilient and coming to terms with what has [happened].”

Neal, the St John official, said he arrived at the crash scene today well after the crash. He described the scene as “pretty well organised” under difficult circumstances. But he also agreed today’s events will have lasting effects on all involved.

“I think for a lot of the first responders, they go and they do their job and they do it professionally,” he said. “But people are still human and it does affect them.”

Fortunately, he said, there are systems in place to help those who need to decompress.

The highway south of Picton remains closed while emergency services attend the scene. Police said it is likely to reopen later this afternoon.

Also at the scene are staff from Marlborough Disaster Victim Identification (DVI) and the Serious Crash Unit.

A St John spokesperson said earlier that three ambulances, two helicopters and a first responder unit were sent just after 7.30am.

“We assessed and treated three patients; one with critical injuries and one with serious injuries both flown to Wellington hospital and one with minor injuries transported to Wairau Hospital via road.”

Crash happened on a ‘bit of a corner’

She went out to see a Big Chill truck lying on its side on State Highway 1, along with police, ambulances and fire trucks.

“A truck … had gone through the railings,” she said. “It was sitting between the railings and the railway line, facing Blenheim direction.”

At that stage she was not aware of a second vehicle being involved, but after walking closer she could see what looked like a van with its boot open, obscured by ambulances.

The highway was not normally busy at this time on a Sunday, she said, and there was no intersection where someone could have pulled out.

The crash had happened on a “bit of a corner”, she said.

Rawlings said it was the same spot where local man Gary Kenny had died in a collision with a truck two years ago.

Rawlings later this afternoon said the scale of the tragedy was really starting to sink in.

“I actually need to go for a walk to try and get away from it,” said Rawlings, who lives near the sprawling crash site.

“Reality hits after a while and you think, ‘Oh my God, seven people have died not far from where we live’. It’s really horrible.”

Other locals who live across the road also heard the horrendous bang of the impact but didn’t know what it was. They didn’t go to the scene and didn’t want comment out of respect for the family of the dead.

A painstaking and grim scene investigation remained ongoing this afternoon, with specialist police serious crash unit officers trying to piece together just what had happened.

The badly-damaged Big Chill truck remained at the scene, along with the smashed silver Toyota Hiace mini-van.

A wide cordon remained in place and rows of trucks bound for Picton were backed up at the side of SH1.

Another local who didn’t hear the crash only noticed something was going on when a helicopter flew overhead.

He said the stretch of road wasn’t the problem but often people going to or from the ferry who are fatigued or “in a rush to get ahead”.

Michael Roberts, chief executive at Big Chill Distribution, confirmed one of the company’s trucks was involved in the crash.

He said it was too early for the company to comment as the “event had really just happened in the last few hours” and full details are still not known.

The deaths bring this year’s road toll to 184 – 27 more than the same date last year – and make this morning’s crash one of the deadliest in New Zealand’s history.

The most lives lost were in a bus crash in 1963 in the Brynderwyn Hills in Northland. Fifteen of the 36 people aboard the bus died after their bus brakes suddenly failed, sending the vehicle down a sheer cliff face.

In 2005, nine people died when their tourist bus collided with a logging truck near Morrinsville, while the truck driver escaped major injury.

Eight people including two babies under 2 died in 1995 when their house bus lost control on a bridge and plunged 50m into a Hawke’s Bay river.

And in 2018, seven people died in a two-car collision in South Taranaki. Passenger Ani Nohinohi lost her partner and two daughters, while four elderly people in the other vehicle also died.

Director of Land Transport Kane Patena expressed the agency’s “deepest sympathies” to those involved in the crash and to the wider community.

Motorists trying to get through the area should expect delays of 60 to 90 minutes, he estimated.