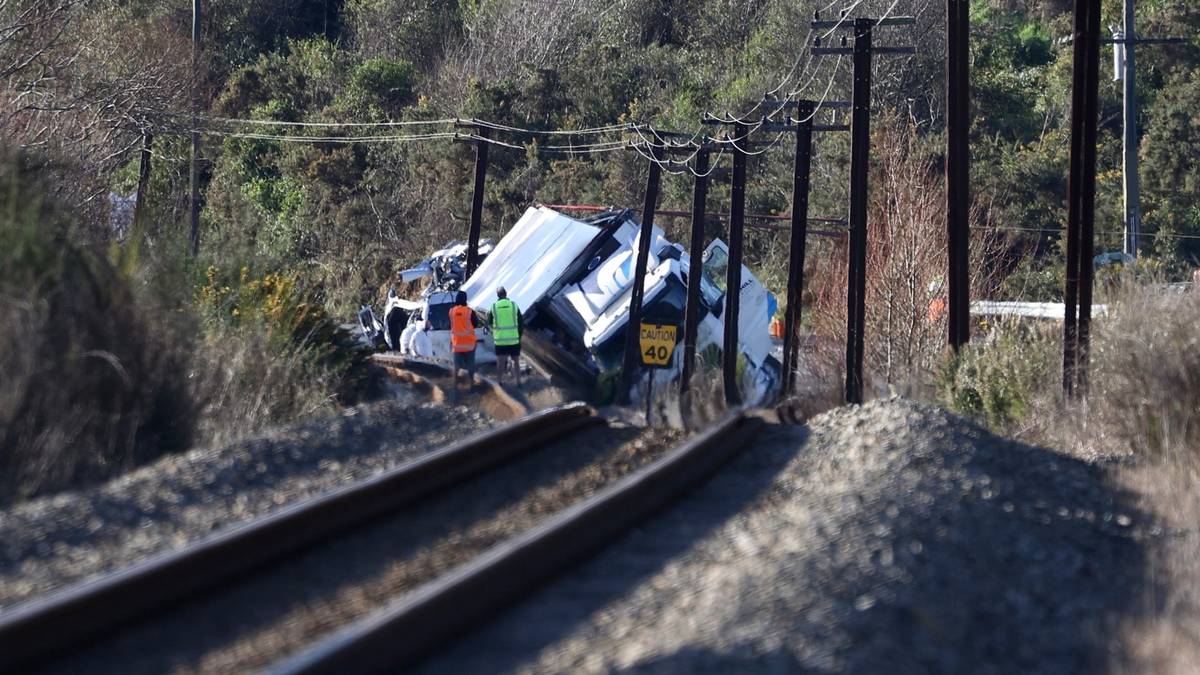 “Absolute carnage” – that’s how police soberly described a crash scene south of Picton today that has resulted in seven deaths, including an infant.

It is now considered one of the deadliest crashes in New Zealand history.

A light van with nine people inside appears to have crossed the centre line and smashed head-on into a refrigerated goods truck around 7.30am, police officials said in a press conference this afternoon outside Blenheim Police Station.

“It’s just absolutely tragic how in the blink of an eye seven lives are lost,” said Tasman District Commander Paul Borrell, extending his condolences to the families of the victims.

“[It’s] a reminder for every single one of us, in a blink of an eye seven lives are gone.”

In addition to the seven deaths, the two others who were inside the van have been taken to Wellington Hospital – one with critical injuries and the other with serious injuries. The truck driver suffered minor injuries.

Police said they are still working to notify next of kin, with officers in Canterbury assisting with the task due to having more staff and resources there.

The crash occurred on State Highway 1 north of Koromiko, as the van travelled north towards Picton. Police said they are still investigating the cause of the crash and will look into safety factors along that stretch of road.

“There’s a variety of things that may have happened and I can’t comment on any of those things until the investigation is completed,” Borrell said.

Marlborough Area Commander Inspector Simon Feltham said police are also looking to provide assistance to all first responders who are coping with what they saw.

“One of our staff members, it was their third day working out of police college,” he explained. “It’s a horrific thing to have to deal with.”

He later posted an update thanking locals for their supportive comments.

“The team is pretty resilient and coming to terms with what has [happened].”

Murray Neal, St John operations support manager for Tasman District, praised the bystanders who rushed to help at the scene.

“We had a number of bystanders on scene who had some good medical training and were able to assist us and the patients quite early on,” Neal told 1News.

“Bystanders are often the first on the scene and do an amazing job for something they aren’t trained to do.”

The highway south of Picton remains closed while emergency services attend the scene. Police said it is likely to reopen later this afternoon.

Also at the scene are staff from Marlborough Disaster Victim Identification (DVI) and the Serious Crash Unit.

A St John spokesperson said three ambulances, two helicopters and a first responder unit were sent just after 7.30am.

“We assessed and treated three patients; one with critical injuries and one with serious injuries both flown to Wellington hospital and one with minor injuries transported to Wairau Hospital via road.”

She went out to see a Big Chill truck lying on its side on State Highway 1, along with police, ambulances and fire trucks.

“A truck … had gone through the railings,” she said. “It was sitting between the railings and the railway line, facing Blenheim direction.”

At that stage she was not aware of a second vehicle being involved, but after walking closer she could see what looked like a van with its boot open, obscured by ambulances.

The highway was not normally busy at this time on a Sunday, she said, and there was no intersection where someone could have pulled out.

The crash had happened on a “bit of a corner”, she said.

Rawlings said it was the same spot where local man Gary Kenny had died in a collision with a truck two years ago.

Michael Roberts, chief executive at Big Chill Distribution, confirmed one of the company’s trucks was involved in the crash.

He said it was too early for the company to comment as the “event had really just happened in the last few hours” and full details are still not known.

The deaths bring this year’s road toll to 184 – 27 more than the same date last year – and make this morning’s crash one of the deadliest in New Zealand’s history.

The most lives lost were in a bus crash in 1963 in the Brynderwyn Hills in Northland. Fifteen of the 36 people aboard the bus died after their bus brakes suddenly failed, sending the vehicle down a sheer cliff face.

In 2005, nine people died when their tourist bus collided with a logging truck near Morrinsville, while the truck driver escaped major injury.

Eight people including two babies under 2 died in 1995 when their house bus lost control on a bridge and plunged 50m into a Hawke’s Bay river.

And in 2018, seven people died in a two-car collision in South Taranaki. Passenger Ani Nohinohi lost her partner and two daughters, while four elderly people in the other vehicle also died.

Director of Land Transport Kane Patena expressed the agency’s “deepest sympathies” to those involved in the crash and to the wider community.

Motorists trying to get through the area should expect delays of 60 to 90 minutes, he estimated.