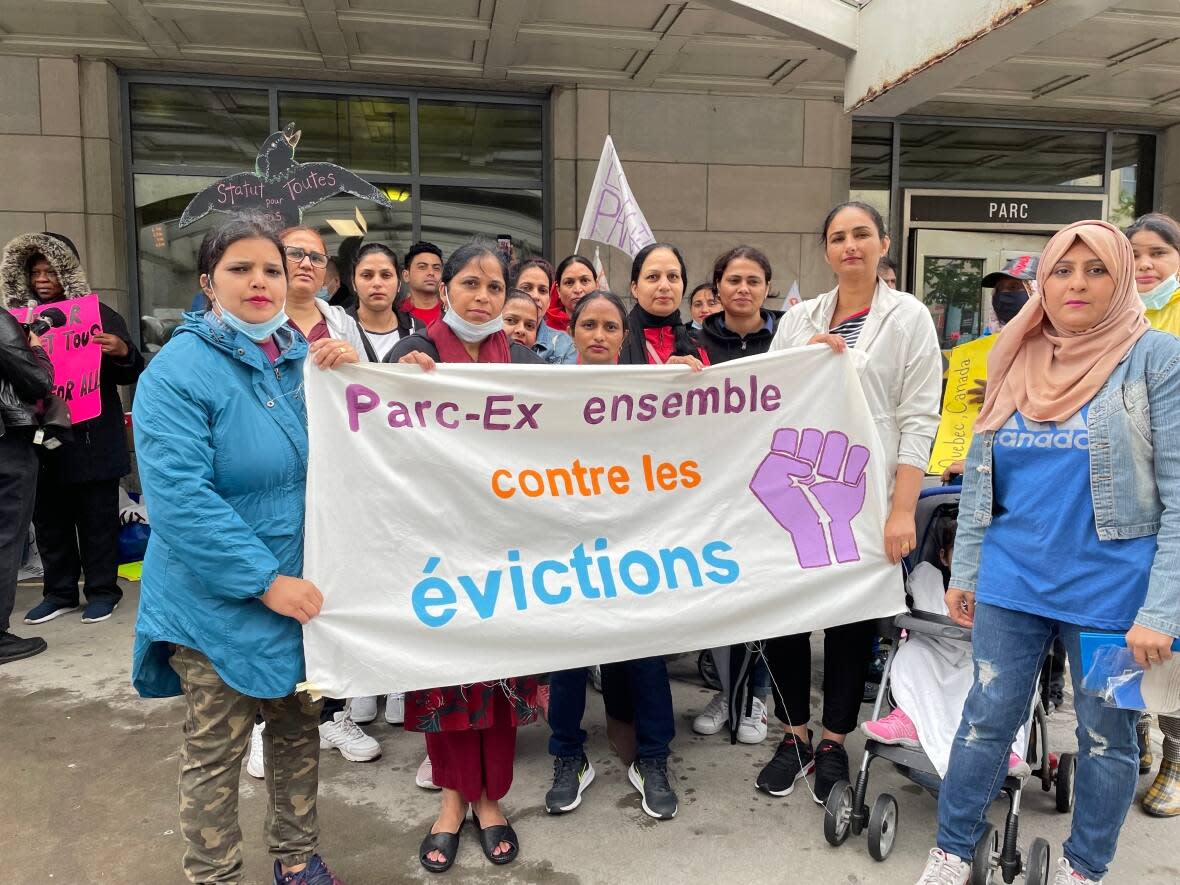 The situation is particularly dire in Park-Extension, said the Comité d’action de Parc Extension (CAPE), which organized a protest there on Saturday.

“We’ve seen a really staggering rise in rent increases and in evictions in the neighbourhood,” said coordinator Amy Darwish.

Last year more than 500 tenant households in the province found themselves without housing on July 1 — the highest figure in 20 years.

The housing committee has been hearing from a staggering number of tenants over recent months, with many saying landlords are resorting to intimidation and holding-off on repairs to push out those paying below the market average.

That’s the situation that Judith Wong found herself in. She has lived in her apartment complex on l’Acadie Boulevard for 24 years. Rent increases over the years have always been reasonable, she said, but things have changed ever since the landlord’s daughter took over.

“She raised our rent too much for us,” said Wong, who came out to advocate for the other tenants in her building.

Others in her apartment complex have been asked to pay up to $1,300 for their units, she said. New tenants are now paying $200 to $300 more than the tenants just prior to them.

The tenants will be challenging the hikes at Quebec’s housing tribunal, which Wong dubbed as “financial abuse.”

“We won’t move, we’re going to keep on fighting,” she said.

‘No checks and balances’

Housing advocate Martin Blanchard said many evictions in the province are happening under false pretences, with landlords filing paperwork on repossessions or subdivisions that are not in fact legitimate.

“I’m very preoccupied with what’s happening right now. There’s a lot of evictions going on and we know that many of them are fraudulent,” he said while attending the protest on Saturday.

“It’s to end the lease of the tenant and to put back the apartment on the rental market at double or triple the price.”

Quebec’s housing tribunal doesn’t follow up to ensure units are in fact repossessed by the landlord or a member of their family, or verify to see if a unit has been subdivided, he said, which makes it easy for landlords to abuse the system.

“There’s no system of checks and balances by the government,” Blanchard said.

If authorities carried out these kinds of verifications and implemented a freeze on subdivisions, much of the evictions currently happening in the province could be prevented, he said.

“If they did that, about 80 per cent of the evictions we are seeing right now would not take place because they are of a fraudulent nature,” Blanchard said.

The two advocates are calling for all levels of government to invest more in social housing and for the province to implement rent control.

“I think what this housing crisis has shown us is that we can’t rely on the private market,” she said.

Darwish pointed to the old Plaza Hutchison just across the street from Parc Metro as one example of how the province has failed the community.

Nearly two years ago, the city of Montreal bought it for $6.5 million with the promise of social housing coming, but it still sits empty to this day. The city has said without funding from AccèsLogis, the province’s social housing program, the project is in limbo.

In statement, borough Mayor Laurence Lavigne Lalonde said she has met with housing groups and shares their concerns. She emphasized the city is doing what it can to support tenants who are looking for affordable housing.