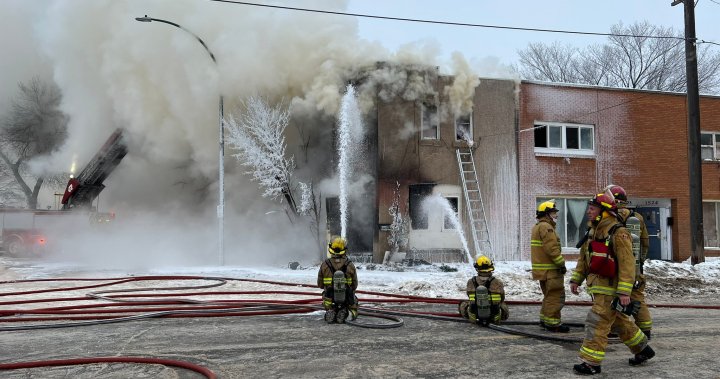 A day after a fire tore through an apartment building in Regina’s heritage neighbourhood, fire crews were on site, sifting through the wreckage.

On the corner of 12th and Halifax Street, Regina Fire had their investigation unit on scene trying to determine if the building was in fact vacant and also trying to sort out the cause of the fire.

Fortunately they were able to provide positive news from Friday’s findings.

Update on the Halifax St fire: Investigators have been working at the scene today and a thorough search has been completed. We can confirm there were no injuries associated with this fire. The area of origin was the kitchen and exact cause is still being determined. #YQR

Previously, there had been conflicting reports on the ground about the building’s tenants and their attempts to find temporary housing through social services.

Carmichael Outreach is directly down the road from where the fire took place. They provided emergency shelter for around 30 people who exited the burning building.

Carmichael told Global News that out of the 15 people who went the route of social services, 13 of them were housed while 2 were denied.

In a statement provided to Global News, the Ministry of Social Services says, “Our understanding is that everyone who presented to social services Thursday either had a place to stay, or we were able to connect them to shelter.

“Work remains underway with our community partners to support impacted individuals to continue accessing emergency shelter as needed, and connecting them with support to begin arrangements for longer-term housing options. ”

The fire began in the five-unit apartment building just after 9 a.m. Thursday morning.

When crews arrived on scene the building was fully engulfed with heavy flames and smoke was coming from inside.

It took crews about three hours to get the blaze under control.

Because of the fire, the building had a great deal of structural stability issues and a collapsed roof, which made it unsafe for firefighters to enter at the time.

Apartment building in flames on 12th and Halifax in #Regina. More info to come. @GlobalRegina pic.twitter.com/DOiPt8wExz

Late Thursday evening a backhoe was brought and portions of the building were torn down so crews could access areas of the fire that were still smouldering and put the fire completely out.

In the next few days, a full disassembly of the building will take place, taking it apart layer by layer.

Once the disassembly takes place, fire investigators will be able to determine where the fire started and the cause of the fire.

Deputy Fire Chief Gord Hewitt explained the process of using heavy machinery to secure and stabilize the building while still unsure if there are any bodies inside.

“It’s a very delicate process,” Hewitt said. “We need to ensure the safety of our investigative team while also being careful and aware that there could still be victims inside.”

Hewitt added that they have determined from fire patterns and markings that the blaze originated in the kitchen of a unit, however a full understanding of the causation will still take more time.