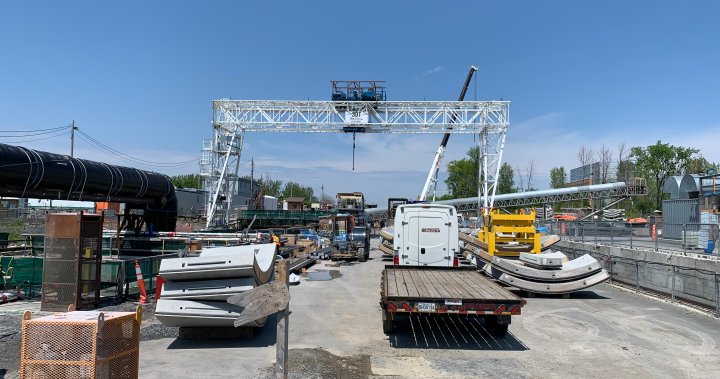 More delays are pushing back plans to build a new Réseau express métropolitain (REM) station at Trudeau airport in Montreal.

It was scheduled to be finished by the end of 2024 but airport officials say that deadline won’t be met.

The Aéroports de Montréal (ADM) lost close to $1 billion due to the COVID-19 pandemic and officials were counting on using some of that money to build the new station.

Construction began in March but it’s unclear when it will be finished.

“We’re not giving a date today because we want to make sure that the date we give is the date that the first train is going to come to the airport,” Anne-Sophie Hamel, a spokesperson for ADM told Global News.

The delay is also pushing back plans to build another REM station just north of the airport, the Marie-Curie station, because both run on the same line.

The future Marie-Curie station is in Montreal’s Technopark, a scientific industrial sector in the Saint-Laurent Borough, home to more than 100 companies with thousands of employees.

The borough mayor fears the delay of both the Trudeau and Marie-Curie REM stations will have a negative impact on economic growth for companies in the near future.

“Their choice of location, the employees who will come, their connections to the airport are all predicated on the REM being operational,” Alan DeSousa, Borough Mayor of Saint-Laurent told Global News.

“We are putting all the effort to put this project into service,” Jean-Vincent Lacroix, a spokesperson for the CDPQ Infra, told Global News.

The rest of the network is scheduled to come into service by the end of 2024.