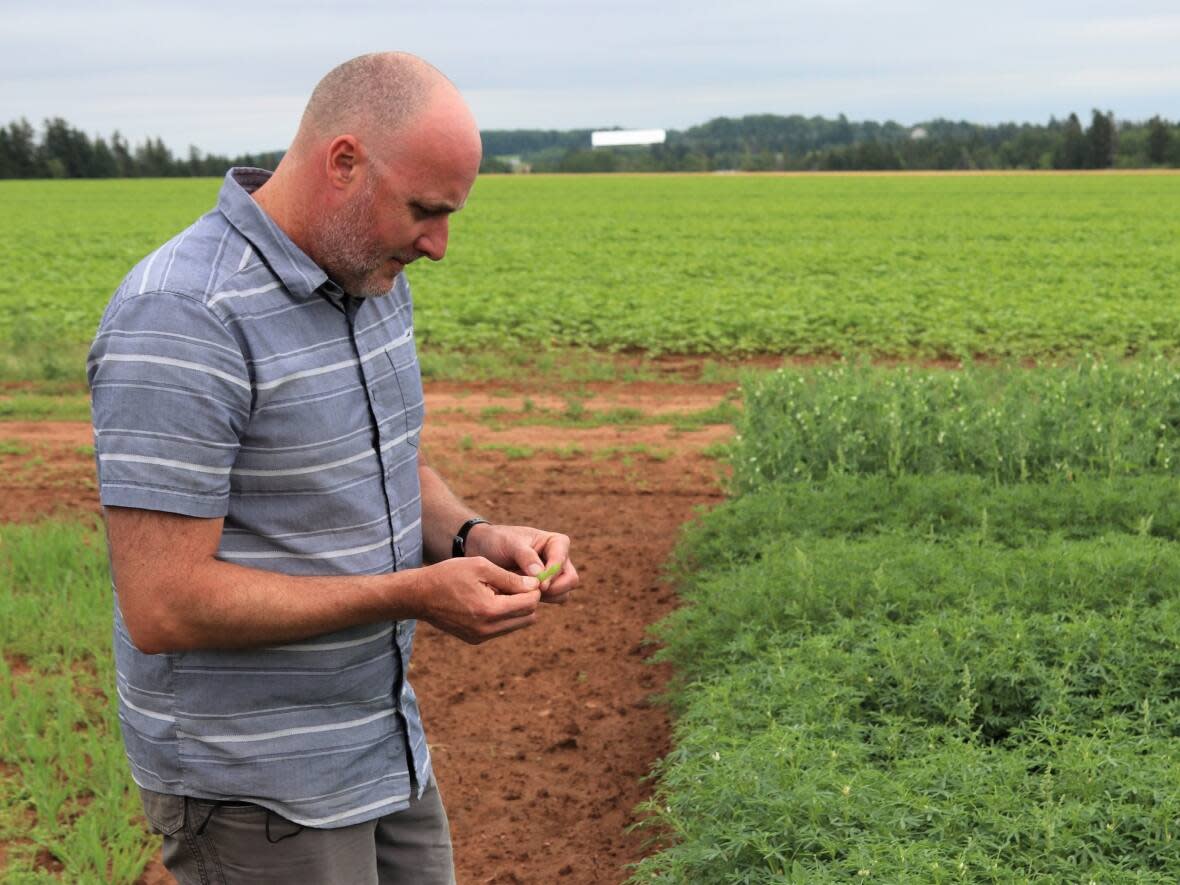 Lupins are a common sight on roadsides and ditches across P.E.I., but researchers are attempting to grow a related crop in fields too — and not just because they’re pretty.

Sweet white lupins are relatives to the wild, and invasive, species which commonly provides a dash of colour to many outdoor settings during the early summer months. But while the latter is poisonous, their white-coloured cousins have been grown as crops elsewhere in the world for centuries.

“They’ve been around quite a while in Europe and it is a fairly common crop produced in the U.K. for quite a few years,” said Agriculture and Agri-Food Canada research scientist Aaron Mills.

“They’ve been developed primarily for animal consumption, but some of these newer … varieties are being developed for [human] consumption as well.”

Mills is part of a team which is working to cultivate these plants on P.E.I. This summer they will attempt to grow the crops for a second time across about 40 hectares.

The plant is a pulse crop similar to chickpeas or fava beans. It yields lupin beans, yellow legume seeds that are highly nutritious and are popular in Mediterranean cooking.

“They taste pretty beany, you know. They have a little bit of a nutty flavour to them,” Mills said. “It has a really high protein content. Right now, the market for plant-based protein is huge.”

Mills said another benefit to the crop is that it is good for the environment and can even end up saving farmers lots of money.

“They’re actually pulling carbon dioxide, which we call fixing carbon, out of the atmosphere, and they’re not releasing nitrogen. So it’s a really good crop from that regard,” he said.

“Right now, the costs of nitrogen are through the roof. So any crops that we can put into our rotation that don’t require a lot of nitrogen fertility [such as pulse crops], they’re going to be good for the bottom line.”

Mills said that there aren’t too many white lupin seeds available on the market, but that could change if the plant grows in popularity.

He said lupins are a “really good fit” for P.E.I. because of ithe relatively cool summers and sandy soil, which would allow the plants to grow successfully.

“It’s definitely not a miracle crop. But it’s just something that could give growers a few more options.”