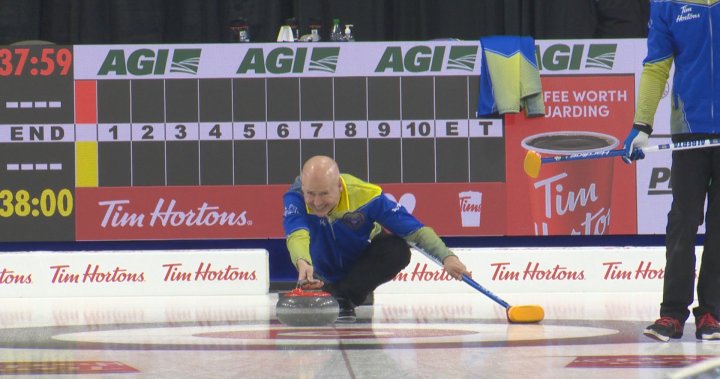 There are 18 rinks chasing a Brier Tankard in Lethbridge this week, but a few curlers at the Enmax Centre are also chasing a place in history.

In a field that features tons of Brier experience, Brad Gushue has more than most, making his 19th appearance in the tournament.

“It’s been a little chaotic so I don’t think we’re coming in here fully rested, but very excited,” Gushue said.

Fresh off a bronze medal at the Olympics in Beijing, Team Gushue has won three of the last five Briers.

A win this year would make it four of six, while also putting Gushue into a tie for the most all-time Brier victories as a skip.

But he isn’t thinking about records.

“Our expectations are much lower right now than they usually are coming into a Brier,” Gushue said.

“We could play pretty relaxed and do well or… the fatigue might catch up with us.”

If he wants to join the record books, the road to the Brier Tankard will likely go through Kevin Koe and Team Alberta.

Already a four-time champion, Koe has a chance to carve out a spot as the first skip with five Briers.

“I know how hard it is. I look at it more as an opportunity,” Koe said. “It’s a good chance. I think we’re playing well, we’ve had a good year and we’re looking good.”

It’s unknown which one of the rinks in Lethbridge will come out on top, but there is one certainty when it comes to Team Koe.

“This will be our last Brier as a team, our last year as a team,” Koe said. “It’s no big deal. I think people make too much of that sometimes.

“It’ll be time to move on, but that being said, we love playing together.

“We want to go out winning a Brier.”

It will be a tough road to the final, with a field that includes defending champion Brendan Bottcher and Team Canada, Olympic gold-medallist Brad Jacobs and university curling champion Matt Dunstone.