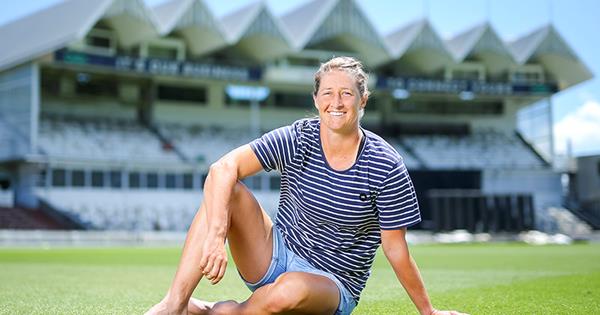 We may only be months into 2022, but White Ferns captain Sophie Devine is already racking up the wins.

When the Weekly speaks to the 32-year-old cricketer, she is enjoying a rare day off in the middle of a series of one-day tests against India. This comes only two weeks after she was hoisting up the Super Smash T20 trophy alongside her Wellington Blaze teammates.

And on March 4, she will lead New Zealand on to the pitch for the inaugural match of the 2022 Women’s Cricket World Cup.

Though she couldn’t possibly be busier, Sophie says she still can’t quite believe that this is her life.

“It’s something I’m really humbled by. If you’d have told me 10 years ago that I’d be leading our team into a home World Cup, I probably wouldn’t have believed you,” says the Wellingtonian. “We’re representing not only our friends and whānau, but also the whole country, which I am incredibly proud to do.”

For Sophie, her love of cricket comes from watching her dad Peter and older brother Sam playing the favourite Kiwi pastime in the backyard. By the age of four, Sophie had picked up the bat and joined the family team.

“Dad was my coach up to high school and has always been my biggest supporter. To this day, he will still give me some friendly advice and I really cherish that.”

While her family, including mum Penny, and sisters Jen and Kate, are her biggest fans come game day, Sophie says it’s their love off the pitch that matters the most. “They’ve always been so supportive, but they always care about me as their sister and daughter, not the White Fern, so it’s always nice to have their backing.”

This will be Sophie’s fourth Cricket World Cup, but she says there’s something extra special about playing at home and she hopes it will inspire the next batch of amazing female cricketers.

“Whether we can have crowds or not is out of our control, but I know that we have certainly felt a great sense of support from people,” enthuses Sophie. “We saw the impact the Men’s World Cup in 2015 had on the whole country. I think about how many kids probably picked up the bat and ball after watching that tournament, and that’s something that is driving us. We want to inspire the next generation, and we do that by playing good cricket and showing people that we’re having fun out there.”

Seeing Sophie’s success, it is hard to believe that this time last year she took a two-month break in the middle of the season to focus on her mental health.

“Looking back to last year, I let things get on top of me a little bit,” she admits. “It taught me that cricket is a very fickle game and you can go from being an absolute hero one game to coming back down to earth pretty quickly the next. It’s a constant learning curve for me, but I’m in a really good space at the moment.”

She credits her team and White Ferns coach Bob Carter with creating an environment where her mental health struggles were taken as seriously as any other injury.

“The most important lesson for me is yes, we play cricket and we do our job, but we are people first, so we’ve got to make sure that we look after ourselves. We’re going to be people a lot longer than we’re going to be cricketers.”

It’s not just mental health that Sophie, who also played for the Black Sticks hockey team until 2008, keeps on top of. As a type 1 diabetic, keeping physically healthy is of the utmost importance. Sophie was only 15 when she was diagnosed with the auto-immune condition and admits as a sport-loving kid, it was a shock.

“It’s still a day that I remember very clearly. Crying in the car outside the doctors with Mum after we were told the news, not knowing what had hit us or what it meant for my life from that point,” recalls Sophie. “I thought I wouldn’t be able to play sport again. I was being a bit dramatic.”

Now, as one of the country’s top sportspeople, Sophie and her teammate Jess Kerr, who also has type 1 diabetes, are proud to show that the diagnosis didn’t stop them from living life to the fullest.

“It’s pretty crazy that we have two diabetics on the team and it’s very cool to share this journey with her. We’ve got a really unique opportunity to show young diabetics that you can still pursue your dreams.”