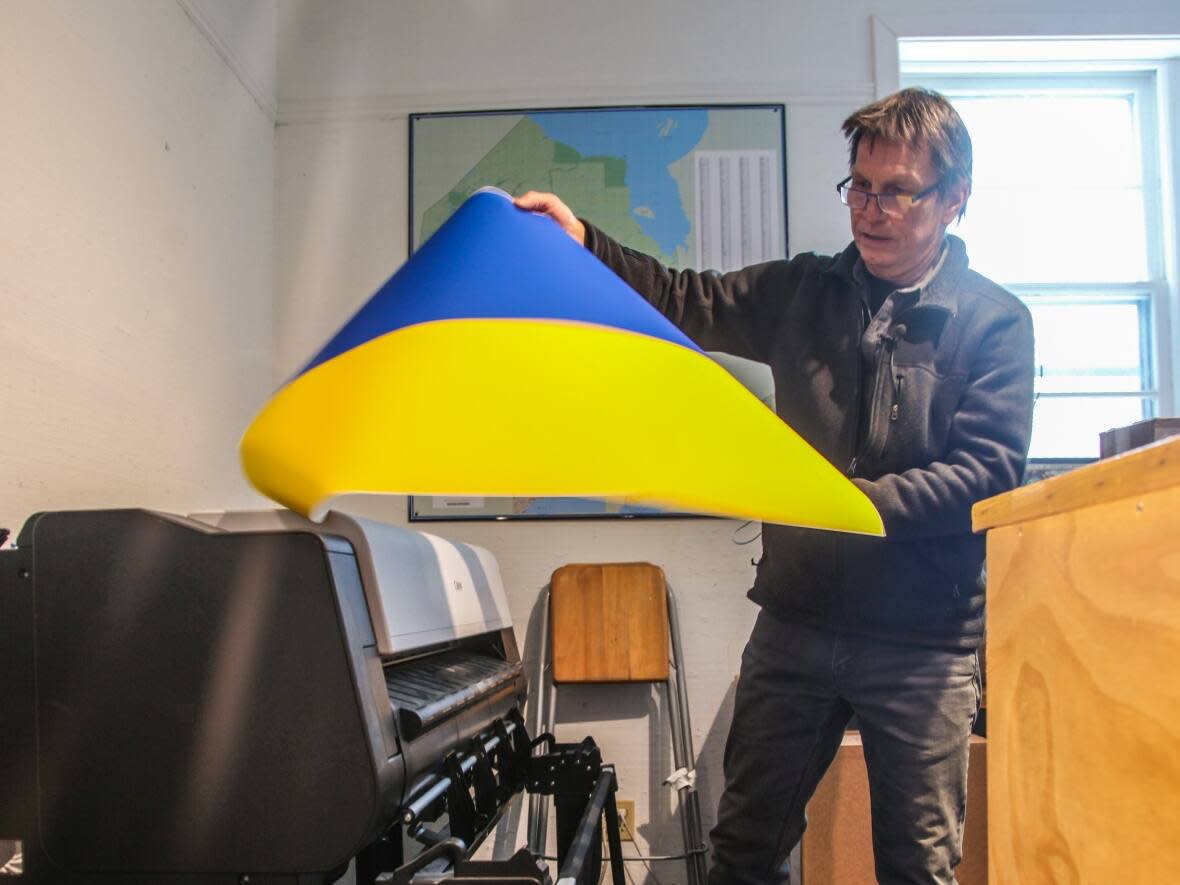 Two suppliers of flags and national symbols in Ottawa say they are overwhelmed with demand for flags of Ukraine as residents support the country being attacked by Russia.

Starting Monday, Russia announced a handful of humanitarian corridors to allow civilians to flee Ukraine, although the evacuation routes were mostly leading to Russia and its ally Belarus, drawing criticism from Ukraine. Meanwhile, Russian forces continued to pummel Ukrainian cities including Mykolaiv, south of the capital of Kyiv, indicating there would be no wider cessation of hostilities.

In Canada’s capital, residents were showing their support for Ukraine by purchasing friendship pins, stickers and flags.

Ottawa resident Doug Hunter emerged from The Flag Shop on Bank Street on Monday with a bag containing a folded Ukrainian flag in a plastic sleeve. That was the last flag in stock, he said, and he intended to fly it from a pole at his home.

“This is a chance to defend democracy around the world,” said Hunter.

“Ukraine is in a horrible position and I wish we could do a whole lot more for them. At least in spirit we can be supporting them.”

WATCH | Demand for Ukrainian flags on the rise in Ottawa

Shop owner Al McLaughlin says the surge in demand for Ukraine’s flag is without precedent, selling thousands of items in the past week. He struggles profiting from the conflict, though.

“It’s a conundrum,” said McLaughlin, who called his storefront a “bellwether” of world events.

“This isn’t the way we like to make money. I’d trade it back no problem if we could avoid all this and lose the sales, by all means I would happily do so.”

The Flag Shop sews many of its flags in house, and Ukraine’s flag is an easier one to reproduce with its blue and yellow bars, McLaughlin said.

The supplier for World of Maps on Wellington Street has run out of Ukrainian flags, says owner Peta Thoms.

A courier dropped off Canada-Ukraine friendship lapel pins on Monday and some bumper stickers, but they were quickly spoken for.

“This, for one country? We have never seen before,” said Thoms, adding the demand had easily outpaced that for flags of nations that have won the World Cup of soccer.

To keep up with demand, she and her husband Brad Green began printing Ukraine’s blue and yellow bars on large sheets of the special synthetic material they normally use for maps.

In the front window, the couple taped up a large map of Ukraine and they say families regularly stop to find landmarks made known by the Russian invasion.

Thoms and Green are taking donations at the cash for the Canadian Red Cross, and have committed to matching what they bring in up to $2,000.

“It’s time to get the money [to] where it would be useful,” said Green.