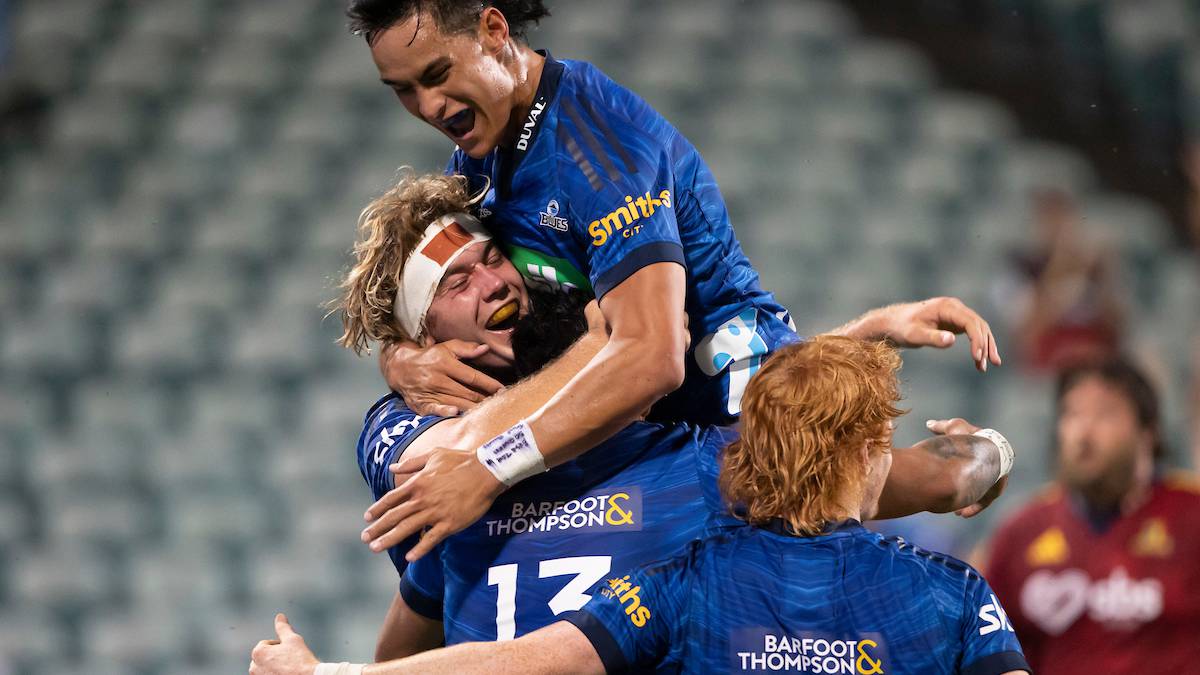 In the complicated environment Covid-19 has created in Super Rugby Pacific, the Blues have proven they are up to the challenge.

Ahead of their match against the Highlanders in Auckland on Friday night, the Blues were hit with several late withdrawals, including Beauden Barrett, following confirmation of Covid-19 within the team. It took some time to come to terms with the adjustments, but the Blues charged home for a 32-20 win, putting the Southerners to the sword in the second half.

With the late withdrawal of Barrett, the Blues’ early attack looked discombobulated. While Stephen Perofeta was a handy replacement in the No 10 jersey, he spent the week preparing to play fullback and the side planned around Barrett pulling the strings.

As a result, the Blues’ first-half attack was frantic and unsuccessful. Perhaps lacking confidence following the late changes, the Blues couldn’t click and couldn’t find a way to bring their stars into the game.

The Highlanders, no doubt in a similar boat having started the season without a win in three games, looked to have their tactics set with the wind at their backs in the opening 40 minutes – get a few phases in before hoisting the ball high into the air and force the Blues to make a play.

It didn’t lend its hand to the most viewer-friendly half of football, but it worked for the Highlanders. If the Blues came up with the ball, the Highlanders forwards were there to apply the pressure – at times making up for some rather aimless kicks.

With a 6-3 lead through 25 minutes, the Highlanders finally saw their field position strategy pay off through a penalty try – with Blues lock Luke Romano deemed to have collapsed a driving maul on the line.

It gave them a 13-3 lead, but they were unable to expand on that while Romano was in the bin, and whatever Blues coach Leon MacDonald said to his side at the break clearly resonated, because they came out of the tunnel much more organised on attack.

They capitalised twice in the first 10 minutes of the second half – with blindside flanker Taine Plumtree in the right place at the right time, finishing off two great pieces of work from Mark Telea for a double out wide.

They began to dominate the set piece, lifted the tempo with quick ball from the ruck, got strong carries through their forwards and their playmakers involved with time and space to work in.

Adding a penalty from about 55m out from the boot of Zarn Sullivan and a try through Rieko Ioane, if there were any early confidence issues with the Blues, those were long gone as they began to turn the screws.

The Blues made sure the game was played in the right end of the field. Be it through their running game or Perofeta’s smart kicking, the Highlanders had their backs against the wall and couldn’t fight back – and their set pieces weren’t helping.

The Highlanders only had one opportunity in the second half to strike and after numerous penalties conceded by the Blues, they finally crashed over when Shannon Frizell ran through Dalton Papalii.

But it was too little too late, and a deserved try to Perofeta in the dying stages saw the Blues claim their second win of the season. The few fans let in were treated to extra football as both sets of players were desperate to score a bonus point-earning try – which neither could find in 10 minutes before the final whistle mercifully sounded.

To compound the issues for the Highlanders, centre Thomas Umaga-Jensen had to be taken from the pitch before halftime with a suspected groin injury, while wing Liam Coombes-Fabling and openside flanker Gareth Evans also left the pitch with injury concerns.