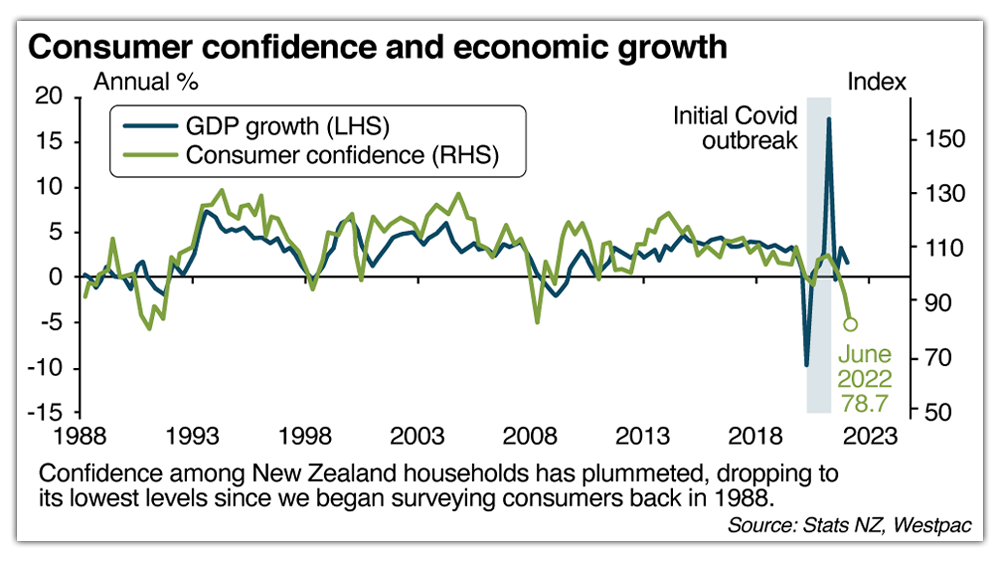 Not so long ago, all anyone would talk about was sky-rocketing house prices.

Then it was Covid, and “Have you had it yet?” followed up by “How did you find it?”

Now it’s petrol prices. And how any trip to a supermarket costs at least $50. And house prices – again (but have you seen how much they’ve fallen?). And your KiwiSaver (same thing).

Throw in recession, Gib, worker shortages, war, inflation – and now our favourite conversation starter is how everything’s in crisis.

Little wonder, then, that consumer confidence plunged to a record low this week.

You may have missed it in amongst everything else but, on Tuesday, the latest Westpac McDermott Miller Consumer Confidence Index for the June quarter fell 13 points to 78.7: the lowest level recorded since the survey began in 1988.

That indicates far more New Zealanders are pessimistic about the economic environment than those who are optimistic.

“Household budgets are being squeezed in a way that they haven’t been for decades,” Westpac acting chief economist Michael Gordon said.

“The combination of rising mortgage rates and increases in living costs has already taken a large bite out of disposable incomes.

“And with interest rates set to rise even further, many households will find the pressure on their finances becoming more intense over the coming months.”

It makes for grim reading.

The detail of the survey was not much better.

“Put your credit card back in your wallet” and “Misery loves company” were just some of the cheery topics covered.

“With growing pessimism about the economic landscape and mounting concerns about their personal finances, households are keeping an increasingly close eye on their purse strings,” it said.

“In fact, the number of households who think it’s a good time to make a major purchase has collapsed, dropping to the lowest level on record.

“At the same time, households have reported that they have scaled back their spending on leisure activities (such as dining out) even as health restrictions have been gradually wound back.”

Finance Minister Grant Robertson, talking to NBR this week, put on a brave face, saying he was confident the economy could weather the storm.

There’s low unemployment after all, and it’s a great time to ask your boss for a pay rise, we keep being told (go on, try it).

But a handful of keen political junkies have told your NBR co-editors this week the latest consumer confidence index will have sent a shudder down the Government’s spine.

Both Helen Clark and John Key are said to have been keen observers of the metric, closely following right track/wrong track polling: if people feel happy and confident, they’re less likely to vote you out.

The problem now is how much of a self-fulfilling prophecy general pessimism proves to be, and whether the lack of confidence plunges us towards a recession quicker than some expect.

The Government needs to find answers, fast. Because for now, ‘how bad everything is’ is all anyone is talking about.