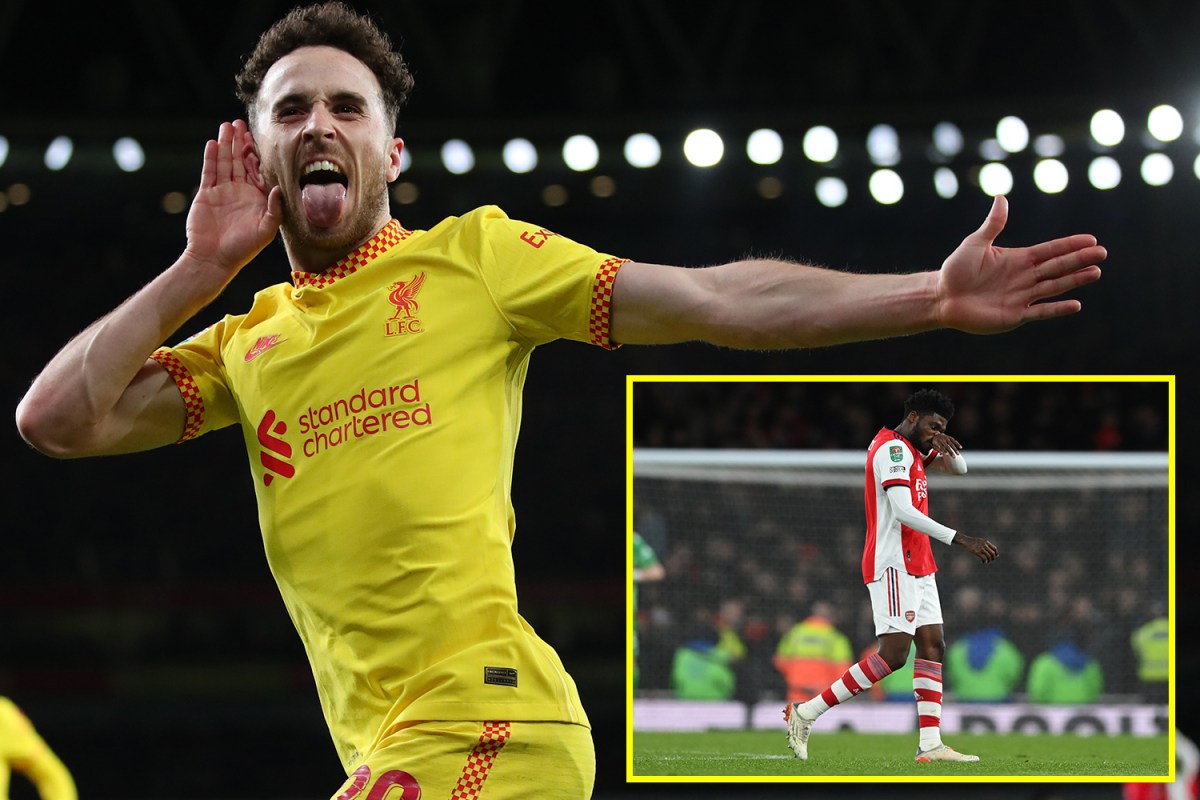 Liverpool will meet Chelsea in the Carabao Cup final as the Reds got the better of Arsenal, winning 2-0 at the Emirates Stadium.

A brace from Diogo Jota was what separated the two sides in the tie having played out a goalless draw in the first leg at Anfield.

It was a particularly forgetful evening for Thomas Partey, who returned to London at midday on Thursday from the Africa Cup of Nations, as he was sent off for a rash challenge on Fabinho late in the clash shortly after entering the field of play.

But Arsenal can have few complaints about the result with a much-improved Liverpool outplaying them on their own patch.

Liverpool will meet Chelsea at Wembley on Sunday, February 27.

It was very much advantage Arsenal as they got a creditable draw on Merseyside and they started like a side confident they could get the job done – they created the first clear-cut chance as Alexandre Lacazette’s early free-kick struck the crossbar.

But it was Liverpool who took the lead somewhat against the run of play as Jota’s effort crept into the net. The Portuguese collected the ball on the left, breezed past Takehiro Tomiyasu before his scuffed effort wrong-footed Aaron Ramsdale and trickled in.

Liverpool started to assume control of proceedings as they took their lead into half time.

The Gunners started the second half with purpose and had a great chance to level when Lacazette was played in by Albert Sambi Lokonga but the Frenchman fired over.

Reds youngster Kaide Gordon also fired over from close range after good work down the left from Jota, while Ibrahima Konate’s headed the ball onto the post from a corner just shy of the hour. Stand-in Liverpool goalkeeper Caoimhin Kelleher did well to keep out a cheeky near-post effort from Gabriel Martinelli.

Jota found the net on 78 minutes as he brilliantly controlled Trent Alexander-Arnold’s searching ball and dinked past Ramsdale but was promptly flagged offside.

However, the incident went to VAR and Arsenal defender Gabriel was adjudged to be playing the Liverpool man onside, the goal sealing their place at Wembley.

Arsenal’s desperation to get back in the tie showed as stoppage-time started with Partey, making an early return from AFCON following Ghana’s premature exit, being dismissed for a bad foul on Fabinho and an earlier challenge on Neco Williams.