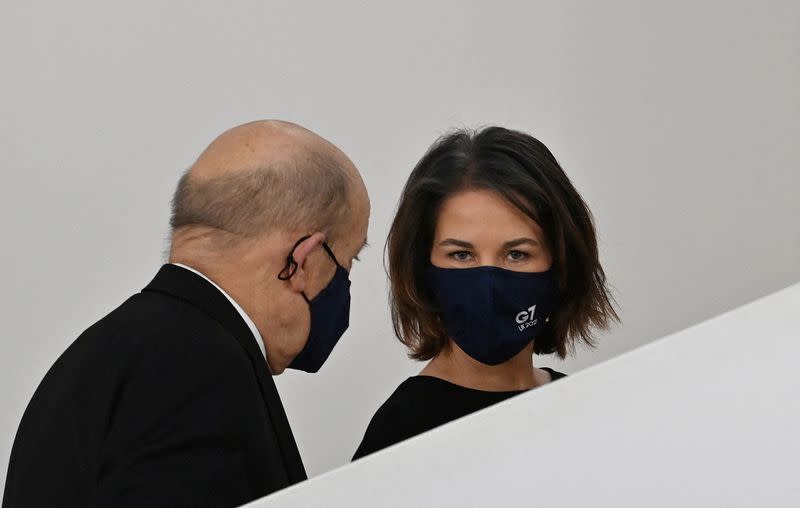 By Alexander Ratz and Humeyra Pamuk

LIVERPOOL, England (Reuters) -Germany’s foreign minister warned on Saturday that time was running out to find a way to revive a 2015 nuclear deal between world powers and Iran, speaking after meetings with her counterparts from G7 countries.

Talks have resumed in Vienna to try to revive the nuclear pact, with both sides trying to gauge the prospects of success after the latest exchanges in the stop-start negotiations.

“It has shown in the last days that we do not have any progress.”

Baerbock said Iran had resumed the talks with a position that set the negotiations back six months. The current round of talks in Vienna follow a pause of five months after the election of a hardline anti-Westerner as Iran’s president, Ebrahim Raisi.

Earlier, U.S. officials said Secretary of State Antony Blinken had held a “productive” meeting with counterparts from Britain, Germany and France on Friday, discussing the way forward for the Iran talks.

A senior State Department official said there was an “intense” conversation among the G7 countries, which were united in their position on the nuclear talks. “The statement will also be strong on the importance of getting Iran back to the table and that it is possible to conclude a deal but that the time is shrinking, so we’re united in that,” the official, briefing reporters on the condition of anonymity, said.

The official added that U.S. Special Envoy for Iran Robert Malley was heading back to Vienna for talks.

Iranian officials have previously said they were sticking to their tough stance.

Under the original nuclear deal, abandoned in 2018 by then-President Donald Trump, Iran limited its nuclear programme in return for relief from U.S., European Union and U.N. sanctions. The West fears the programme would be used to develop weapons, something Tehran denies.

Raisi said on Saturday that Tehran was serious in its nuclear talks in Vienna, the official IRNA news agency reported.

The indirect U.S.-Iranian talks, in which diplomats from France, Britain, Germany, Russia and China shuttle between them because Tehran refuses direct contact with Washington, aim to get both sides to resume full compliance with the accord.

The G7 meeting which is expected to result in a joint call for Iran to moderate its nuclear programme and grasp the opportunity of the Vienna talks.