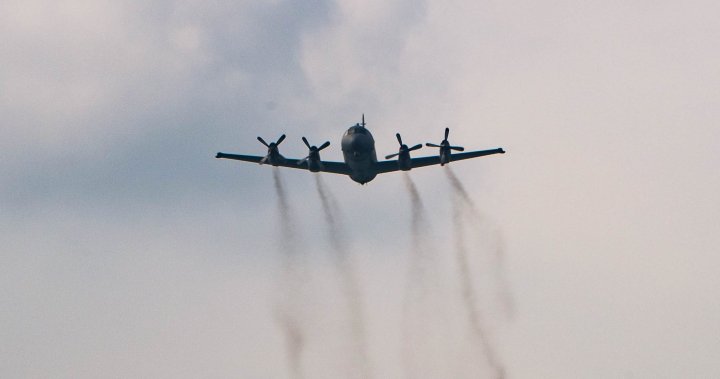 Prime Minister Justin Trudeau says his government will be addressing reports of Chinese fighter jet pilots “buzzing” Canadian planes over international waters directly with Chinese officials to ensure it is not part of an “escalatory pattern.”

Global News first reported citing multiple government sources that Chinese jets have repeatedly flown so close to a Canadian surveillance plane in the Asia-Pacific region that Canadian pilots could make eye contact with Chinese pilots, who have sometimes shown their middle fingers.

“We take this situation very seriously,” Trudeau told reporters while speaking at an event in the Siksika First Nation in Alberta on Thursday.

“The fact that China would have chosen to do this is extremely troubling, so we will be bringing it up directly with Chinese officials and (government) counterparts and ensuring that this doesn’t continue to be part of an escalatory pattern.”

The Canadian CP-140 Aurora plane is currently taking part in Operation Neon, part of United Nations efforts to enforce sanctions against North Korea and prevent the rogue nation’s development of weapons of mass destruction. The plane is flown frequently by multiple, rotating crews.

Sources told Global News there have been approximately 60 of these types of intercepts with Chinese fighter jets since Christmas. Over two dozen have been deemed dangerous. Experts said they were concerned a pilot error could lead to a mid-air collision and spark an international incident.

The Department of National Defence (DND) later confirmed details of the incidents to Global News. A spokesperson said they are “of concern and of increasing frequency” and sometimes force the Canadian pilots to quickly alter their flight paths.

Trudeau did not specify how the government would raise the issue with Beijing. Ottawa has already sent multiple diplomatic reprimands, according to sources, calling the Chinese pilots’ conduct “unsafe and unprofessional.” China is believed to have not responded to the reprimands, and the incidents have continued.

China’s foreign ministry has yet to comment on the allegations, despite repeated requests for comment from Global News.

Foreign Affairs Minister Melanie Joly said Thursday she would raise the issue with her Chinese counterpart.

“I am extremely concerned that there have been incidents in this region of the world,” Joly told a news conference at the Citadelle in Quebec City, where she was meeting with her counterparts from the Baltic region. She said “it is certain” she will raise the issue with Chinese officials.

Asked if she considered the behaviour of the Chinese air force to be an act of aggression against Canada, Joly said the behaviour was a “meaningful gesture” and needs to be discussed with her counterpart.

Michael Chong, the Conservative foreign affairs critic, told reporters in Ottawa that the allegations are proof that China’s military is “unprofessional and poorly trained.”

“I think it’s a hallmark of authoritarian states — their militaries are not as well trained and do not follow the same rules that everyone else must follow over international waters,” he said, adding similar “reckless” behaviour has been observed of Russia’s military in Ukraine.

Chong said the federal government needs to acknowledge the threat such authoritarian regimes pose to national security and increase defence spending, including Canada’s contributions to NATO.

Group Capt. Lyle Holt, Commander of the United Nations Command-Rear that oversees UN bases in Japan — including the one that houses Operation Neon and the Aurora plane that has been repeatedly buzzed — called the report “disturbing” on Twitter.

This is a disturbing report. https://t.co/r2tl8eGDtf

A spokesperson for Norway’s UN mission, which chairs the Security Council Sanctions Committee on North Korea, told Global News they could not speak to the reports, but added it takes “any possible violations of the sanctions regime seriously.”

China has said it has enforced UN sanctions on North Korea over its weapons program, but continues to support the rogue nation economically and financially. It joined Russia last week in vetoing a U.S.-led push for further sanctions in response to renewed missile tests.

A spokesperson for the U.S. Department of Defence told Global News they are not aware of any reports of similar aggressive behaviour toward U.S. pilots in the region.

Asked by reporters on Thursday at the U.S. State Department if the American military is seeing increased aggression there, spokesperson Ned Price wouldn’t comment. He referred to past condemnation of China’s “provocative military activity” around Taiwan and other parts of the Asian Pacific.

“We’ve called this activity destabilizing,” he said. “We’re concerned, because it risks miscalculation. It undermines regional peace and stability as well.”

1:35
U.S. ‘stands firmly’ against possible annexation of Taiwan through force from China: Biden

U.S. ‘stands firmly’ against possible annexation of Taiwan through force from China: Biden – May 23, 2022

China has increased its military presence in the Asia-Pacific region over the last two years, particularly around Taiwan, which Beijing claims as its territory. It has stepped up drills and manoeuvres around the island, and confirmed on Wednesday that it has conducted a combat “readiness patrol” in the sea and air in recent days.

This is not the first time China has been accused of flying dangerously close to Canadian military missions.

In 2019, Canadian Global Affairs Institute fellow Matthew Fisher wrote in a column on the think tank’s website that Chinese fighter jets flew within 300 metres of the bow of the a Canadian warship, HMCS Regina, in international waters.

Yet Fisher, who was aboard the ship, said that while the display was more aggressive than previous encounters the Canadian Navy had with Chinese warplanes, it was not considered dangerous.

Chinese state media reported on the incident around the same time, claiming the Chinese pilots had given the Canadian vessel “a warm welcome.”