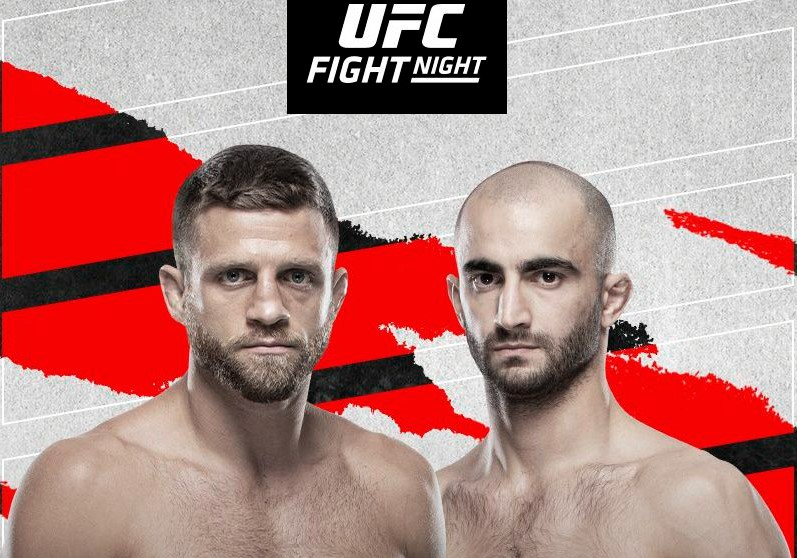 The UFC’s first event of the year is another edition of Fight Night, airing from The Apex Center in Las Vegas. It just so happens to be taking place on January 15th, anniversary of the first-ever Super Bowl. On that day in 1967, the Green Bay Packers of the NFL beat the Kansas City Chiefs of the AFL. Fifty-five years later, the Super Bowl is not just the biggest day of the year in American Football, it’s one of the biggest days in all sports across the globe.

This week’s main event features two familiar faces from the featherweight division, Calvin Kattar and Giga Chikadze. Although it’s only been a few weeks, it feels like forever since I’ve seen two well-trained athletes climb into the octagon together and give it all they’ve got. I’m excited about the first UFC event of 2022; without further ado, let’s get into it!

Calvin Kattar hasn’t been seen inside the octagon since January of 2021. On that day, almost a year ago, he lost to former world title-holder Max Holloway in a one-sided unanimous decision. Kattar was raised a half-hour drive from Boston, Massachusetts, hometown of Rocky Marciano and “Marvelous” Marvin Hagler. Coming from an area known for producing some of the fiercest men in the history of combat sports, fans can bet Kattar will not be discouraged by one ugly defeat. Prior to his loss against Holloway, Kattar had emerged victorious in four of his last five fights. If he has an impressive showing on Saturday, his career will be back on the right track.

Giga Chikadze hasn’t lost a fight since June of 2018. That was six months before the first installment of the Wilder versus Fury Trilogy and less than a year after the Mayweather versus McGregor spectacle. If that doesn’t put the ever-changing nature of the combat sports landscape into perspective I’m not sure what does.

The names grabbing the headlines are different in 2022, but one thing remains the same, Giga Chikadze is as consistent a performer as there is in the entire sport. His last three victories have all come by way of knockout and he’s garnered Performance of The Night honors for all three as well. The whispers that he is deserving of a title shot are morphing into shouts. A win on Saturday could move him one step closer towards that goal.

Jake Collier was never an athlete growing up. Instead, he was overweight and unpopular. At the age of twenty, he decided he was tired of “not getting the girl”; it was time to lose weight and become the best version of himself. Thirteen years later, he is a mixed martial artist in the most renowned organization in the sport. Kudos to him for that.

Chase Sherman was an athlete his entire life. Ultimately, his dedication to sports led him to play four years of college football. After graduating from school and being told by scouts he had little to no chance to land in the NFL, he decided to give mixed martial arts a chance. That was ten years ago and he’s still going strong.

Sherman is the favorite going into this fight, but these men are separated by one year in age, one inch in height and ten pounds in weight. They are very evenly matched. Anything can happen when these two very large men get into the octagon together. One thing’s for sure, they’ve both got a chip on their shoulders and feel they have something to prove.

Brandon Royval and Rogério Bontorin are both ranked in the top ten in the UFC’s flyweight division. Royval has been training in Brazilian Jiu-jitsu and Muay Thai since the age of fifteen. However, he does not hold a belt in either discipline. Bontorin, on the other hand, is a Black belt in Brazilian Jiu-jitsu. These two fighters took very different paths towards their ultimate goals of UFC stardom.

Royval began his career by fighting in regional circuits in the Western United States. Bontorin began fighting in Brazil and Japan, making a name for himself as one of the best strikers in the division. On Saturday, they will climb into the octagon to determine which of them moves closer to the number one contender spot and the elusive title shot they’ve both been waiting for.

Katlyn Chookagian and Jennifer Maia each fought once in the calendar of year of 2021. While they both emerged with unanimous decision victories, there are question marks surrounding each fighter’s ability to stay active among the elite competitors in the women’s flyweight division. Although the promotion would like them to be more active, they are both currently ranked in the top ten in the division by the UFC.

Chookagian was a lifelong karate apprentice before transitioning to mixed martial arts.Maia was a professional boxer before deciding her skills were better suited for the octagon than the ring. On Saturday, fans will get the chance to see which of these athletes will take a step forwards and which will start the year with a loss and a setback in the momentum they’ve gained.

Dakota Bush made his UFC debut in April of last year in a unanimous decision defeat at the hands of Austin Hubbard. He’s vowed to come back stronger and take the lessons he learned at the hands of the more experienced fighter to heart. Slava Borschev, on the other hand, made his organizational debut in October by defeating Chris Duncan on The Contender Series.

While Bush and Borschev are two of the more inexperienced fighters in the organization, they’re also two of the best prospects in the heavily-talented lightweight division. Making a name for yourself is harder at lightweight than it is anywhere else in the UFC, but these two warriors will not be hesitant when they climb into the octagon on Saturday with a chance to do just that.

Bill Algeo and Joanderson Brito are both Black belts in Brazilian Jiu-jitsu. At 26-years-old, Brito made quite a name for himself in his home country of Brazil before bursting onto the scene with a win at Dana White’s Contender Series last year. Algeo himself used The Contender Series to launch his career back in June of 2019. Now, these two featherweights find themselves matched up against one another at the Apex Center in Las Vegas. Neither man is ranked in the top fifteen in the division; an impressive performance on Saturday could change that for good.

UFC Fight Night can be viewed on BT Sport in the United Kingdom and on ESPN Plus in the United States. As always, we’ll have all the latest updates about the outcomes of the fights, as well as in-depth analysis available right here at World In Sport!