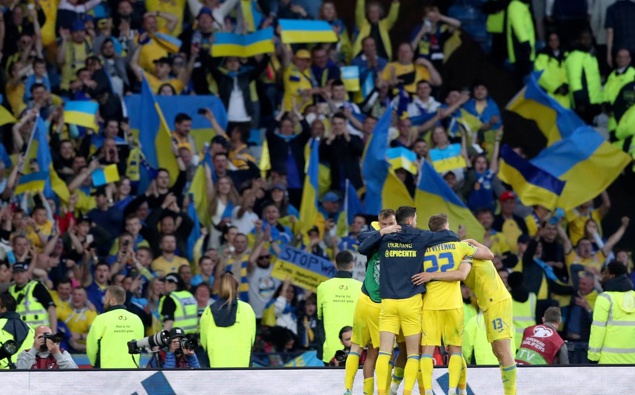 Ukraine’s emotion-filled quest to qualify for the World Cup amid an ongoing war moved a step closer with a 3-1 win over Scotland in a pulsating playoff semifinal.

Veteran captain Andriy Yarmolenko lifted his nation by scoring a deft lobbed goal in the 33rd minute and then helped set up Roman Yaremchuk’s header in the 49th.

Ukraine dominated for much of a deserved win though had to resist a Scotland revival as risk-filled attacks brought a goal in the 79th by Callum McGregor, before Ukraine substitute Artem Dovbyk broke clear to score with the last kick of the game.

“What a wonderful night for the people of Ukraine. Against all the odds,” the TV commentator said.

“What a tale. this team have come together to keep their World Cup dream alive.”

Now Ukraine moves on to face Wales on Sunday with a place in the World Cup at stake.

The winner in Cardiff will go to Qatar in November to play in a group against England, the United States and Iran.

Ukraine put in a slick display despite using six starters who had not played a competitive game of any kind since December.

Most of Ukraine’s squad play for home-based clubs whose league was shut down after Russia’s invasion, and the playoff in Glasgow was postponed in March. FIFA and Scotland agreed to give the Ukrainian team a fair chance to prepare for games that have become a focus of national identity and pride.

Scotland lacked the class needed and its wait for World Cup football now extends beyond the 24 years since it went to the 1998 tournament.

Ukraine’s win could have been sealed earlier but for saves early and often by 39-year-old Scotland goalkeeper Craig Gordon. When the Scots chased a way back into the game, John McGinn placed a 67th-minute header inexplicably wide from close range.

Ukraine is riding a wave of global goodwill as the victim of Russian aggression and its players’ intense motivation to reward the nation with a place on football’s biggest stage was clear.

The Ukrainian players all walked onto the field with a blue and yellow national flag draped on their shoulders.

Among the crowd of 51,000 were at least 3,000 Ukraine fans, some who travelled far and had made plans to stay in Britain for the decisive playoff Sunday.

George Butromeyev told The Associated Press before the game he came from Toronto with friends to support the players who “need to show the people of Ukraine that we are warriors.”