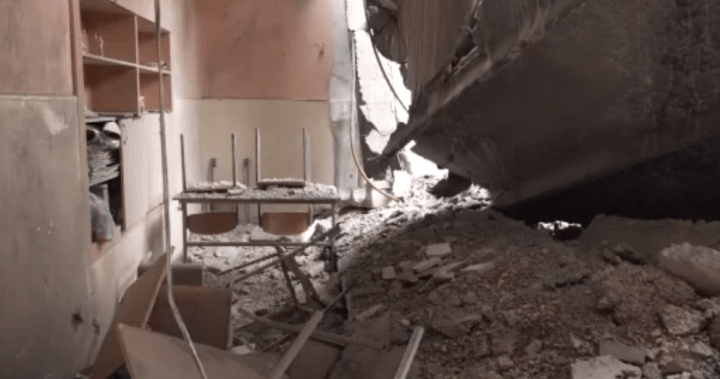 At 8:30 a.m. on a weekday, one would expect children to be noisily making their way to classrooms for a day of learning at a public school.

Normally, they’d be even more enthusiastic at the end of the school year.

But at two schools in Ukraine toured by Global News, there are no students to see or hear. Only the disturbing sound of distant artillery fire shatters the quiet.

Inside one empty school, it’s hard not to step on broken glass or metal in hallways and classrooms.

The building is a wreck, pummelled by what appears to be rocket fire from a Russian attack in early April.

At the other school, we meet Iryna, an English teacher who spent her whole career inside the building: 40 years. She started teaching right after her graduation from university.

Now, she’s living in its basement.

When asked if she’s afraid when she hears the booming sounds of war, Iryna nods affirmatively.

“Certainly, all of us are,” she says in a calm voice.

But it’s preferable and safer to live below ground here than at her home in the city, Iryna points out.

The absence of students in Ukrainian schools is understandable: it would be impossible to provide a safe learning environment under the present circumstances. Staying alive is the key priority.

According to UNICEF, three million children inside Ukraine and 2.2 million children living in refugee-hosting countries require humanitarian assistance. The agency says two out of three Ukrainian children have been displaced by fighting.

This is the entryway to the school in Kharkiv. This attack happened in early April. Luckily, it took place overnight. pic.twitter.com/E9byngxTak

Another report points out the stark reality of what the war will mean for Ukraine’s youth.

“In total, learning losses in Ukraine can amount to over one year, due to extended pandemic-related closure and the war,” according to an analysis conducted for the World Bank.

The long-term effects of the learning loss “could be substantial, with future earnings losses of more than 10 per cent a year per student,” the report warns.

But forecasts aren’t on Oleksandr Gryanik’s mind right now. The school director, who has spent more than 25 years on the job, goes room to room pointing out damage — which is plain for anyone to see.

On an upper floor of the school hit by rocket fire, he pauses inside one classroom that’s obliterated. The outside concrete wall has collapsed inward, crushing desks. There’s a wide-open view of the sky above and the playground below.

2:59
Volunteers on dangerous and tedious task of cleaning up mines across Ukraine

It was a classroom where Russian literature and other classes were taught, Gryanik explains in Ukrainian. He points out the irony that this room was likely the most heavily damaged by the Russian attack, which took place in the middle of the night.

Later on, Gryanik leads the way to another room containing Ukrainian cultural artifacts, including traditional clothing, artwork, and ceramic pieces.

By contrast, this room was left unscathed: the windows and walls left are completely intact.

Every piece inside this shrine represents a part of Ukrainian history and was left unbroken or even disturbed by the blasts which made the school unfit to study in.

Gryanik describes how the room’s contents provide a source of inspiration. He smiles and proudly takes a moment to pick up a small, cherished wooden stool used to milk cows, a personal item he contributed to the collection.

Back at the other school, the veteran English teacher, Iryna, is asked what she hopes will happen in the fall when the academic year normally resumes.

“We hope for peace. For the return of our pupils. It’s our biggest hope. But we don’t know.”