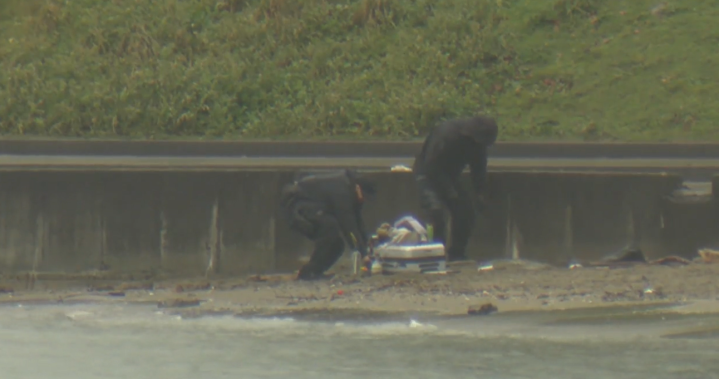 Vancouver police say they detonated a suspicious device near a barge that has been stranded near Sunset Beach since a storm hit the region earlier this month.

VPD spokesperson Sgt. Steve Addison said a passerby called police Saturday morning to report a suspicious man on the beach “with a device that appeared to be a bomb.”

“There were a lot of people in the area, so VPD blocked off a section of the waterfront to keep people out of harm’s way, and eventually took the man into custody when it was safe to do so,” Addison said.

0:36
Efforts to remove barge that run aground on Vancouver’s Sunset Beach have failed

Efforts to remove barge that run aground on Vancouver’s Sunset Beach have failed – Nov 16, 2021

The VPD emergency response team was deployed and detonated the device. No one was hurt, and Addison said it was unclear if the man would face charges on Saturday.

The large barge drifted loose in English Bay on Nov. 15, amid the powerful storm that triggered flooding and landslides around southern B.C.

An initial attempt to refloat it proved unsuccessful, and it remains unclear when the barge will be moved.