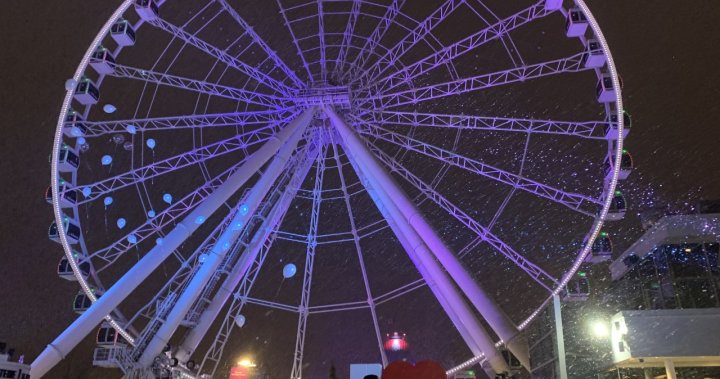 More than 200 people, including friends, family and co-workers, gathered in the Old Port to remember the life of 22-year-old Riley Jonathan Valcin who died on Christmas Day in a workplace accident at Montreal’s Old Port Ferris Wheel.

People whose lives were touched by Valcin brought flowers and gave speeches, describing him as a successful man who was funny, hardworking and an incredible friend.

His best friend, Roberto Rivera-Rubio, said Valcin changed his life after giving him the confidence to shed his shy attitude.

“He was always smaller than me but he’s a giant, he’s always shown that,” Rivera-Rubio said fighting back tears.

“You’d think that I’d be defending him. But it was Riley who always defended me when I was in danger. Riley would put himself forward. He was a warrior until the end.”

“I’m sure he will watch us from above. Thank you Riley, you were the best friend I could ever have,” Rivera-Rubio said.

“I feel that he’s here with me and holding me by the arm like when we were kids. Even after his death, he keeps helping me. I thank you my brother.”

After speeches, people made their way to the foot of the ferris wheel, where Valcin spent some of his life’s last moments.

To the tune of Amazing Grace, people in attendance released white balloons in his memory.

Valcin worked for La Grande Roue in his spare time.

But on Christmas Day, he tragically lost his life in a workplace accident.

Since then, the wheel is not in operation and won’t be until further notice, according to La Grande Roue.

Valcin was a civil engineering student at Polytechnique.

He leaves behind his grieving father, mother and his older brother, Joey Valcin, who organized the vigil as well as friends such as Alexis Poirier.

“The only thing I can remember of him is his positive energy and what he spread out to the world. With anybody, really anybody,” said Poirier, a friend from school.

“He would always be positive.”

Since Valcin’s passing, a GoFundMe was set up by Rivera-Rubio to help the family with expenses.

He will be buried this weekend.